Despite chronic and systemic infrastructure issues, it is possible for Latin American nations to benefit from adaptive traffic management systems.

Today’s streets in Latin America have seen the growth in traffic infrastructure that comes with the economic development of the region, yet improving traffic flow further has proved to be a big challenge for cities in the region. “As intelligent transport technologies continue to update and open new solutions in the market, the challenges for implementing responsive traffic management solutions in Latin America continue to grow,” says Abelardo Bonilla of TrafficLight R&D.

Problems across the board

The difficulties in building and enabling a traffic management center can be found at all levels. Often having less authority than departments of mobility in other developed nations, Latin American transport authorities are not recognized as independent bodies but are under the control of municipal governments. This reduces the opportunities for decision making, budget investment and longterm planning, as matters considered more pressing are given more attention, which often leads to badly maintained infrastructure. Because there are a limited number of specialists working on traffic technologies, a fragile situation now exists in which there is an incompatibility between many of the traffic technologies and systems.

Few cities in Mexico are able to change the phases from an intersection remotely.

The variety of communication protocols used in traffic controllers and traffic management software over the years has resulted in cities in the region having in their traffic infrastructure a number of traffic controllers that are unable to communicate with each other. This has provided road authorities with a major headache, as to ensure compatibility they will have to replace a large part of their current traffic controller systems. Due to the lack of standardization between systems, in many places it is still common to see the majority of intersections being run in isolation without any ability to communicate with subsequent intersections. This limits the ability to coordinate traffic lights for better traffic flow. For such effective coordination, the reliability and quality of communication is key. As well as traffic controller communications protocols, ITS, VMS, CCTV, traffic counting and tunnel management all have their own levels of autonomy, meaning an extra degree of integration for implementing an effective adaptive traffic control center is required. Today a variety of equipment and software solutions is available, ranging in degree of complexity of installation, capacity of integration and budget availability. 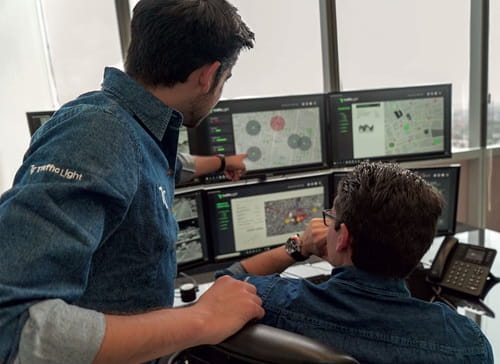 The keys to success

For a fully responsive system to be managed in real time, a steady and fast telecommunications infrastructure needs to be implemented across a network in order to allow sensors, presence detectors and IoT technologies to communicate bidirectionally to the system. Such communication can be through fiber-optic, wi-fi, Bluetooth or Zigbee protocols. Most cities in Latin America lack the planning for, and implementation of, fiber optics for the development of their traffic management, which means that some communications between controllers are being performed through somewhat unreliable radio-frequency antennas.

Partial or full financing of the required systems by private organizations allows the authorities to have technologies available that are otherwise not affordable. Such public-private relationships allow authorities to minimize risk, reduce implementation times for the project and reduce overall costs.

In other public services, such as public lighting, cases have shown that a private party is capable of providing an effective and reliable service by designing, implementing, operating and maintaining the project and its assets. This gives the cities the possibility of obtaining all the benefits from the project, with specialized guidance for better and more accurate long-term investments. One thing is for sure: Latin American cities are growing bigger and the need to solve the increasing traffic congestion and reduce the number of incidents should be a top priority for all city planners.

ITS and Intertraffic Mexico enter partnership

How increased livability and environmental awareness have effect on urban mobility