With the continuous growth of the population and ongoing urbanisation there are numerous mobility challenges. Sustainability, safety and societal impact are amongst our daily concerns. We need to speed up the mobility transition to keep up with the fast changing global dynamics, which requires inventive approaches and better solutions. In this series we share inspiring and innovative cases from all over the world. Marcel Tjin is entrepreneur and CEO of Tjinco bv. He developed Leer in het Verkeer (Learn in traffic): an educative programme which enables schools and parents to teach children in the age of 1-6 about traffic. How does he speed up the mobility transition?

Since 1992 I have been working in the mobility industry. I used to work at Vermolen Groep by then the market leader in the Netherlands that produces traffic signs. Even though I really enjoyed my job, I felt something was missing. I wanted to make an impact as an entrepreneur. In 2008 I decided to become self-employed and started my own business. Ten years ago I launched the programme for municipalities, schools and parents called Leer in het Verkeer, based on the illustrations from Dick Bruna who is worldwide well known as the illustrator and also author of amongst others the character called Miffy.

‘I can get quite annoyed when I see a parent with his child ignoring the traffic light.’

At the time I was also a father of two young children. I remembered the first thing that came into my mind when our first was born: I surely hope I will not have a car accident. Having children reminds you of your vulnerability and task to keep them safe. Of course I am more aware because of my profession, but I can get quite annoyed when I see a parent with child on a bicycle ignoring a traffic light. As a parent you should set the right example. Then I realised that even though children are part of traffic from an early age, Dutch children only pass their cycling exams at the age of 10. I wondered if we shouldn’t start much earlier in making them aware of traffic.

‘Parents have a major impact on the traffic behaviour of their children.’

Even though the number of traffic accidents with children in the Netherlands has decreased over the last decade, most accidents still happen on the bicycle or on foot being hit by a car. To prevent traffic accidents now and in the future, children need to learn about traffic, practice and get the right examples from adults. Parents have a major impact on the traffic behaviour of their children. Research showed that parents find road safety very important, however due to busy family life and hurrying, they are not very much aware of the impact a wrong decision can have. I wanted to find a way to increase road safety for children by teaching them traffic rules in an attractive and recognizable way from an early age, offering schools and parents a playful method to explain their children about traffic.

The actual idea for Leer in het Verkeer started when a municipal officer came to me with a question. He always read his children the Dick Bruna story Stop at the kerb and he was wondering if I could produce a sidewalk tile with the front cover of the book on it which he could install in the school environments in his municipality. By creating this he would be able to explain his children the dangers and rules in a real traffic situation. So in fact he was able to combine the theory (reading the book) and practical exercise (explaining on the street) in a playful way. Another feature of the tile is to point out the route to school. So we created an educational route with the help of famous and recognisable illustrations. Around the same time there was a national demand for an educational traffic programme for young children. It all came together and so I decided to give it a go and start the project.

‘Teaching children is the essence of Dick Bruna’s stories.’

Before starting the programme we had to make arrangements with Mercis bv who is managing Dick Bruna’s worldwide copyrights. They were very positive about the programme. And Dick Bruna himself, the author and illustrator of Miffy amongst others, was very enthusiastic from the start. Teaching children is the essence of Dick Bruna’s stories. He even designed new illustrations for us! We also got funding from Metropoolregio Rotterdam Den Haag (MRDH) for developing it and we complied with the Dutch pedagogical rules for road safety programmes in order to become an official and approved traffic educational programme.

‘Dick Bruna illustrations appeal to the imagination of young children.’

Leer in het Verkeer offers an educative traffic programme for children at the age of 1-6. Through child friendly illustrations children learn about traffic rules. At home, on the streets and at school. Dick Bruna illustrations appeal to the imagination of young children. At school the children learn the theory using materials provided. With the schoolyard materials, schools and daycare centers can create a safe street at the playground area. With the permission and by order of the municipality, we place corresponding sidewalk tiles and Dick Bruna traffic signs along the school route. These materials help parents to teach children the traffic rules on the street. In order to keep drivers of motor vehicles alert, attention-enhancing road safety products can also be placed along the school route, such as attention signs, silhouette signs and bollards. All this enlarges the awareness and ensures a sustainably safe school environment. 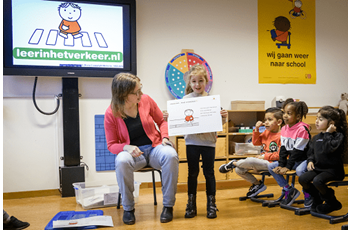 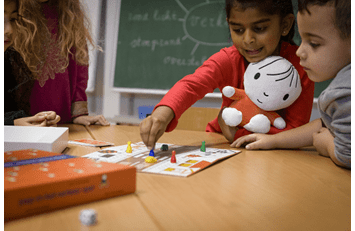 ‘The first results were promising, but we need to keep surprising the brains.’

We started the pilot 10 years ago in the communities of Westland and Delft. With the opening we launched a new traffic square for children (see pictures). The energy that was produced with this first pilot was just amazing. And the first results of the effect were promising too. Since the start we launched the projects in more than 600 schools, day-cares and municipalities in the Netherlands and Belgium. The first research has shown that drivers on a 30 and 50 km road estimate their own preferred speed and the speed of others to be about 4 km/hour lower when they see a Dick Bruna sign than in the same situation without a Dick Bruna sign. 4km is a significant difference when it comes to road safety and traffic accidents in an urban area. In real traffic this would result in 20% reduction in crashes.

2017 Field research (SWOV, R-2017-11) in real traffic gave us new insights from which we learned a lot when it comes to the behaviour of drivers. In the first week average speed decreased by 0.75km per hour, the speed that is not exceeded by 85% of the drivers decreased by approximately 1.5km/h and the proportion of drivers exceeding the speed limit, decreased by about 5 percentage points. But in the second week the effect disappeared. It might be that after a while people no longer lower their speed in the area where only Dick Bruna signs were used. Apparently more measures are needed to make it a sustainable solution.

Even though field research is very relevant, this one was not 100% representative and raises extra questions. We still have a lot to discover. What if they did the same experimtent on roads designed and credible enough to enforce the speed limit of 30km/h? And what would happen if this was tested in a school environment? Would this change the behaviour of the drivers due to the association with children?NonetheIess I am glad to see the positive effect of the Dick Bruna signs on the behaviour of the drivers. To keep surprising the brains we could change the signs from time to time. And the best places to use the Dick Bruna signs are places where children are walking and playing. I always recommend to use the 3E’s method (Engineering, Enforcement and Education) to have a maximum impact.

‘It is the human being that always makes the final move so we will always need to remind people of their behaviour.’

Being able to contribute to this, gives me so much energy. The result that energizes me the most is that parents use the Dick Bruna tiles to teach children where to stop. I receive stories from parents telling me that their children take it so serious that they literally stop at every tile they walk by while the parents are in a hurry. Actually, the children teach their parents about the traffic rules; not only the other way around. I always enjoy it when children remind you to wear your seat belt or stop at a traffic light. New technologies help improving our road safety, but it is the human being who makes the final move or decision. So we will always need to remind people of their behaviour. I hope to inspire more municipalities, parents, schools to make such an impact. Maybe even abroad.