The number of passenger kilometres travelled declined by 50-60% worldwide since the onset of the COVID-19 crisis including the use of micromobility solutions. However, due to shorter distance travels and fear of contamination in public transport, citizens of some cities chose a bicycle over other modes of transport, experiencing the benefits for health and environment. Has this crisis speeded things up or not? In this article we discuss three micromobility developments.

Since the start of the Corona crisis it’s clear the number of kilometres travelled decreased for all modes of transport, except walking. Cities such as Stockholm and London report reductions in public transport usage of between 60 and 75% at various stages of the pandemic. In the Netherlands the number of driven kilometres on the road decreased by 44% in the first lockdown compared to the same period a year before. 40% of the previous public transport users in China have switched to private car use. Based on an analysis of iPhone data from summer 2020, the number of passenger-kilometres travelled by private and shared micromobility vehicles has decreased by an estimated 60 to 70% in Europe and the United States.

However, the same data source already shows a U-shape recovery. Timing differs per country and city. In Germany citizens have recognised the benefits of cycling in their everyday mobility behaviour as cycling appeared as the most important mode of transport besides walking in April 2020. During lockdown, people across Germany spent twice as much time riding their bikes as before. In France, cycling levels after the lockdown have increased by 27% compared to the same period in 2019. Cycling companies in Beijing experienced an increase of bike ride volume between 120-187%.

Sharing service Lime shows a 34% increase in average duration per trip from February to April 2020 as well as an increase in average trip distances, from 1.69 to 2.05 kilometres. In Australia bike sales is booming. As Giant Sydney says it: “We’re the new toilet paper and everyone wants a piece.” Bicycle sales and use of micromobility are estimated to grow in 2021. This asks for a change.

Interesting to see is the motivation of governments that have already started to change. It seems we have come closer to reaching our climate goals since emissions decreased to 20-30% in some cases in China and Italy since lockdowns started. Therefore urban governments have tried their best to stay away from gridlock and more people changing from public transport to cars. In order to do so, they needed to make cycling more attractive. A lot of European cities therefore plan to change infrastructure towards a more cycling friendly one or have initiated other programmes:

Jill Warren, Director of the European Cyclists’ Federation hopes after this crisis governments will keep this up in encouraging citizens to cycle: ‘The importance of making cycling safe cannot be overstated in terms of successfully encouraging many more people to cycle. At its best this means investing in high quality segregated/protected cycling infrastructure, but improvements in the shorter term could include reducing speed limits for motorised traffic, and re-zoning certain streets to give cyclists priority, for example.’ Road safety needs to remain top priority. A study of over 35,000 hospital records in the United Kingdom found that over two-thirds of hospitalisations due to bicycling crashes did not involve another vehicle. Especially with new modalities popping up. The Netherlands, the cycling country of the world, has 37,000 km of cycle lanes. It is however estimated one third of cycle lanes are either inaccessible or too small. Deodaat Boer of the company Cycledata helps local governments to detect bicycles and improve traffic flows: ‘Our mobility mindset is still focussed on cars; this needs to change.’

A good alternative for longer distances and healthy mode as well is the electric bicycle. More than half of the consumers see electric bikes as a substitute for some car usage and 28% see e-bikes will mostly replace cars for inner-city transport. A remarkable detail: women are one of the key drivers for the increased e-bike sales.

Research showed a third (32%) of respondents would buy or use an e-bike in 2020 to conquer longer distances or steeper climbs, and many would use one to improve their physical (30%) and mental (22%) health. Additionally one in five adults wants to use an e-bike because they are concerned about the impact on environment. CONEBI refelcted on 2019 data from European member states organisations and revealed that sales value rose largely thanks to 23% growth in electric bike sales over the prior year tally. The share of e-bikes in total bicycle sales reached 17%. CONEBI expects e-Bike sales to more than double by 2025, reaching an estimated 6.5 million units sold. 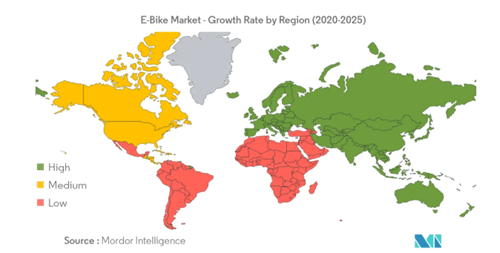 The European region is expected to hold the largest electric bike market share, within Europe: Germany, France and Italy. In the Netherlands the e-bike is now the most commonly sold type of bicycle. And cargo bike sales are surging too - up 53% since the start of the pandemic. Innovation of the product such as fully integrated batteries, stylish designs and the use of high quality materials will drive the e-bike market.

Next level bicycles is the bicycle driven by hydrogen. The Dutch design agency StudioMom has developed the LAVO bicycle with hydrogen drive. StudioMOM designed the two-wheeler for the Australian company The Providence Asset Group, which focuses on clean mobility through the use of hydrogen.

“LAVO's technology has a storage capacity that is three times the size of a modern battery and a lifespan that is more than twice as long,” said the Australians. StudioMom also developed a modern e-cargo bike around the hydrogen drive.

Shared micromobility has been affected since the outbreak of COVID-19. Research showed less than 10% believe shared micromobility to be safe. In Christchurch New Zealand scooter ridership decreased by 20% compared to where it was early July 2019 and companies have withdrawn vehicles or paused operations in several cities where they served universities and businesses.

Another development offers a solution to the fear of contamination; more shared micrmobility parties offer longer-term vehicle bookings and subscriptions. Also named as “personal micromobility”. Amsterdam-based service Swapfiets offers bike subscriptions and recently started or will start soon in London, Milan and Paris after demand lifted its customer base to more than 200,000 during the pandemic. Bird and Lime already started offering monthly rentals for their vehicles since spring 2019.

The global pandemic has transformed our way of thinking about travel and made us more aware. More aware of the value of sustainable and noice-reducing transportation modes.

Road safety is however a bigger challenge. Both public and private sector need to continue the change and promote pedal power. If more people become comfortable using micromobility instead of private vehicles and the habits will mean bikes and scooters, the change is within our reach.

How COVID-19 can or cannot contribute to our environment

Watch the recording of the webinar on sustainable mobility

Sustainable mobility: Is COVID-19 speeding it up or slowing it down?