Technological barriers to the elevated future of mobility

Can urban transportation be lifted off the ground?

Companies are developing aircraft capable of carrying passengers and cargo in urban environments. So what's keeping them grounded? Several key technological barriers need to be overcome before air taxis take to the skies.

Deloitte’s recent article Elevating the future of mobility examined six challenges associated with achieving a scaled commercial deployment of eVTOL (electric vertical takeoff and landing) aircraft. One of the key challenges is how to resolve the complex technological issues, ranging from energy management to advanced detect-and-avoid capabilities.

Even as tomorrow’s mobility ecosystem takes shape at street level, many aviation and technology leaders see the future of urban transportation in the skies. In working to unlock this third dimension, companies are looking to lift people and products above and beyond roadway congestion and save significant amounts of time.

Granted, the elevated future of mobility is far from assured—right now, consumers worldwide are understandably leery about climbing into flying taxis—but major aircraft manufacturers, network operators, investors, and both technology veterans and startups are taking the prospect of urban air transit seriously. Though discussions about regulations are at an early stage, investors have already put hundreds of millions of dollars toward R&D for eVTOL aircraft and expect them to be operational within a decade.

Examples of progress are easy to find: For some years, the aviation industry has been developing eVTOL aircraft that lifts off and lands like a helicopter and flies like a traditional plane. But manufacturers must overcome several key technology barriers, from battery issues to collision avoidance and situational awareness, before eVTOL aircraft can rise above city streets. This article explores the technological barriers currently hindering companies that want to take part in this ecosystem from successfully lifting people and products and transporting them safely, affordably, and expediently to their destinations—and the approaches to address these barriers.

Hundreds of companies are working on concept vehicles, most of which take off vertically and can fly on wings using hybrid or all-electric propulsion. Getting airborne is only the first step, though: For these aircraft to become a safe, affordable, and an efficient mode of transportation for the masses, they would need to incorporate technology that makes it possible to carry multiple passengers and higher cargo payloads meaningful distances in a single charge at speeds that significantly reduce current travel time (figure 1). 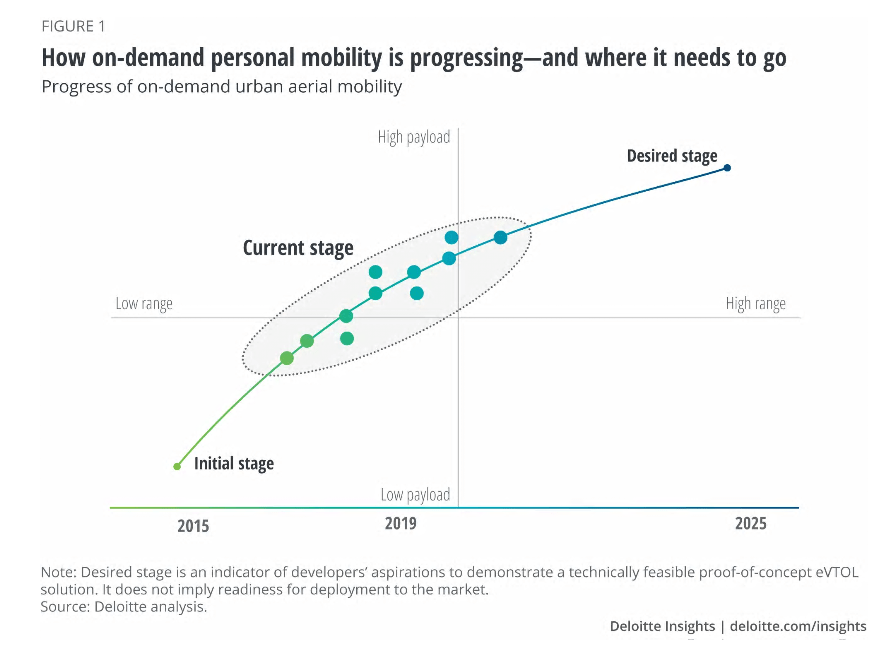 Despite the technological progress of eVTOL aircraft, several key challenges persist, primarily related to propulsion, situational awareness systems, and advanced detection and collision avoidance systems. Moreover, the vehicle itself represents only one part of the overall technological challenge: Outside, robust air traffic management is a key challenge—how these vehicles operate in the airspace along with existing commercial and civilian aircraft, helicopters, and commercial and recreational drones. Therefore, technology affects all three pillars of the elevated future of mobility: creators, operators, and regulators. Our research suggests that the aviation industry faces five major technological barriers to lifting people and products above city streets (figure 2). 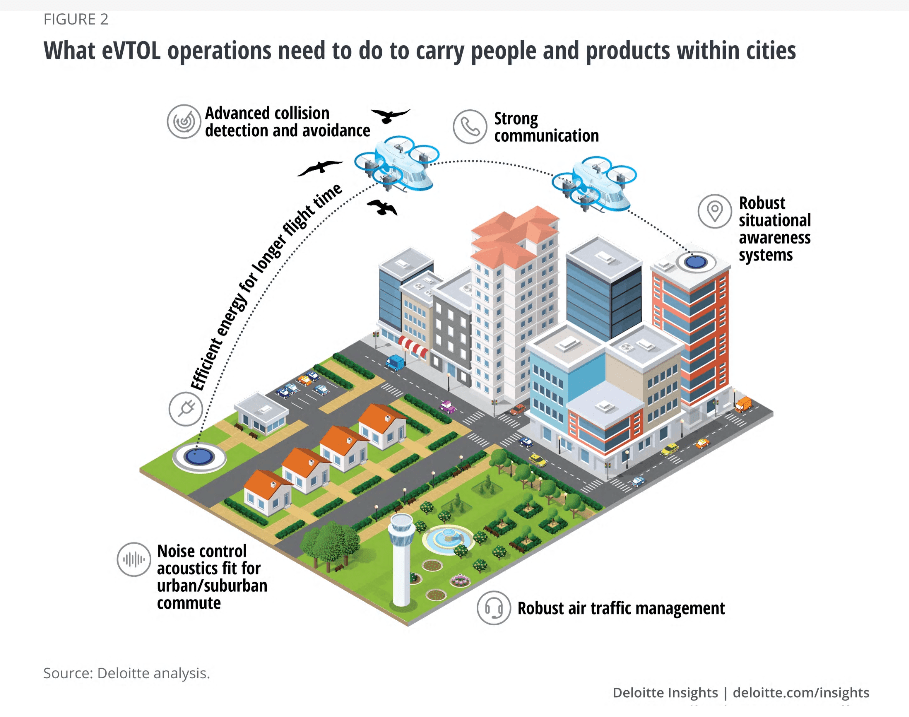 3. Advanced detection and collision avoidance system. The established infrastructure for aircraft to communicate is expanding, with systems such as ADS–B (automatic dependent surveillance–broadcast) that show other aircraft currently aloft. But to make on-the-fly decisions and ensure passenger and cargo safety, autonomous eVTOL aircraft would need to be able to see even farther ahead. Enhanced detect-and-avoid technology that uses micro or millimeter wave technology is needed to (a) accurately identify and measure objects over longer distances, especially in difficult terrain and unsafe operating environments and (b) assist in real-time decision-making to establish safe navigation during bad weather conditions.

5. Noise control acoustics. When envisioning passengers climbing into an air taxi, few think of them pulling on helicopter-style earmuffs, but noise levels in today’s eVTOL aircraft may necessitate such a step—which can’t help but impede public acceptance. Reducing vehicles’ noise profile is a priority the industry should continue to address now, at the development stage. eVTOL aircraft manufacturers should work on the ducted rotors’ acoustics, primarily cutting the rotor tip speeds to reduce noise levels relative to helicopters.

How might players in the new mobility ecosystem work to make eVTOL aircraft a reality? By leveraging advances in autonomy, strengthening collaboration within the entire ecosystem, and investing in advanced technologies such as machine learning, artificial intelligence, and high-performance computing.

To be able to offer urban on-demand air mobility, ecosystem players should develop and work on an integrated framework across manufacturing, operations, and certification by leveraging advances in technology from on-ground autonomy, expanding partnerships that could enable capability growth, and investing in machine learning capabilities (figure 3). Aviation companies may be able to adapt some technologies currently under development for on-ground autonomous vehicles. 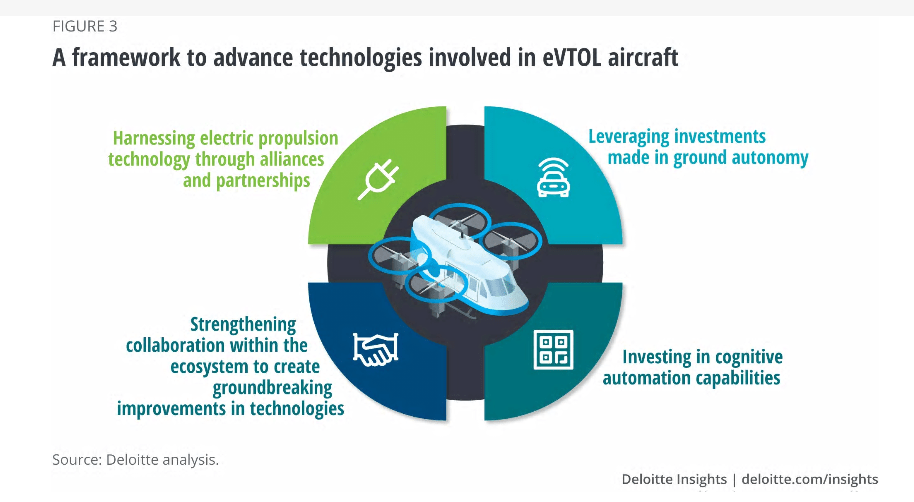 Collaborations and partnerships across companies, industries such as automotive and energy, and even across different areas of technology could be key to realizing eVTOLs’ growth potential. Based on research, we recommend the following strategies to address some of the key technological barriers.

Harnessing electric propulsion technology through alliances and partnerships. Since the future of eVTOL hinges on having an efficient and high-performance propulsion system, the ecosystem players should focus on leveraging distributed electric propulsion (DEP) technology. To be commercially successful, eVTOLs would need batteries that are light, powerful, long-lasting, cheap, and quick-charging. DEP technology offers potential: It uses several small electric motors distributed all along the aircraft, dramatically reducing the energy that conventional helicopters use while supplying sufficient energy to carry people and higher cargo payloads. But achieving this would likely require the entire industry to work together, since it involves developing advanced power sources, a combination of electrical power-producing devices such as electric generators and fuel cells as well as energy storage devices such as batteries and capacitors.

Leveraging investments made in ground autonomy. Industry players can benefit from strong tailwinds from the investments made in autonomous cars. On the computing side, semiconductor makers are fashioning powerful chips that allow manufacturers to perform advanced computations that weren’t even fathomable a few years ago. For instance, embracing micro- and millimeter-wave technology in radar sensors promises to advance collision detection and avoidance capabilities and presents an opportunity to establish safe navigation capabilities.v

Investing in cognitive automation capabilities. Notwithstanding sci-fi visions of commuters steering their own airships between skyscrapers, the clear trend is toward self-piloting airborne vehicles. Autonomy offers economic benefits—for instance, lowering pilot costs and making a seat available for passenger use —as well as potentially easing integration into the broader mobility ecosystem. But accomplishing full autonomy is expected to take time. eVTOL aircraft would likely require a pilot in the early stages, and by utilizing machine learning to capture the pilots' actions and outcomes over thousands of operational hours, full autonomy can be accelerated. Specifically, industry players could leverage machine learning with deep learning networks to enable eVTOLs to identify, label, and map objects on their flight routes as well as distinguish between different objects.

If eVTOL aircraft are to become a reality over the next decade, companies will need to make significant progress to develop the required technologies and earn the confidence of skeptical consumers. Established aviation manufacturers, new market entrants, and small companies working on innovative concepts could all contribute to this effort, aspiring to reach a point where public demonstration of their aircraft can show that these vehicles can be safe, quiet, and affordable. And from that point forward, industry players could work toward certification to launch vehicles that would be available for commercial services.