Tbilisi, the capital of Georgia, has been under Persian, Turkish, Mongol, Russian and Soviet rule in its 1600-year history and was, once upon a time, a Silk Road capital. Its rich but occasionally turbulent past, mountainous location, Middle Eastern-influenced architecture, spectacular Mtkvari riverside setting and reputation as a major cultural and educational centre (not to mention its unique and historical polyphonic singing) has made Tbilisi an attractive tourist destination and earned it the unofficial title of the world’s most bohemian city. What it is currently lacking, though, is an equally celebrated transport system but this is something that the Transportation & Urban Development Agency is urgently addressing.

Visitors to Intertraffic Amsterdam may have stopped by the Agency’s stand and availed themselves of the city’s grand plans, but we caught up with Deputy Head Vasil Abuladze to find out how these ambitions are going to be realised.

Technology at the heart of it

Clearly there is a huge amount of work that has been carried out with, by the sound of it, as much again still to be done. Abuladze and his team are ambitious and driven to succeed.

“Technological developments also play a vital role while implementing innovations in the municipal transport system,” he adds. “Parking regulations and organising what we call the principles of transportation also rely on the technological development of the city. One such development is in the administration of offences on our public transport network. We installed a navigation system that constantly controls the movement of all Tbilisi’s transportation modes. This allows for an immediate response from the relevant authorities.” 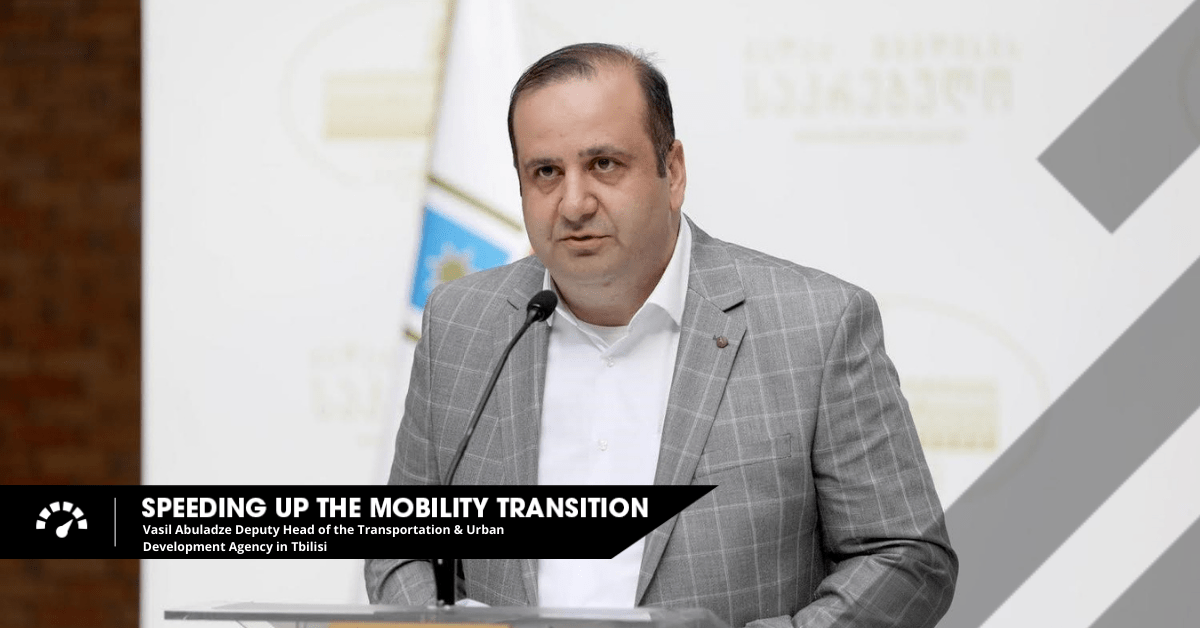 During the Soviet era, Tbilisi’s Municipal Transportation System consisted of Hungarian-made Icarus buses, Latvian-made RAF mini-buses (known locally as marshrutkas) and Russian-made trolley buses and trams, but by the end of the 20th century the Georgian Civil War had almost completely demolished the entire transportation system. Restoration and reparation of the bus network, for example, only began in 2007 and it has needed further renewal and improvement in the last few years.

Says Abuladze: “The city’s modern transportation policy aims at relieving the capital city from traffic jams and decreasing the resultant air pollution. This policy is primarily focused on developing a public transportation system for the 21st century. To achieve this goal, the old and tired bus fleet has to be replaced by modern vehicles, and in particular steps have been taken to increase the comfort of our public transportation modes for passengers.”

Tbilisi Mayor Kakha Kaladze announced in March 2021 that the fleet of yellow minibuses in the Georgian capital would be fully replaced with new minibuses by the end of 2021, with the fleet reduced from 3,000 to only 1,000 (featuring almost 500 new vehicles) with the remainder of the routes being served by eight-meter buses. The city is evidently backing up its words with actions. 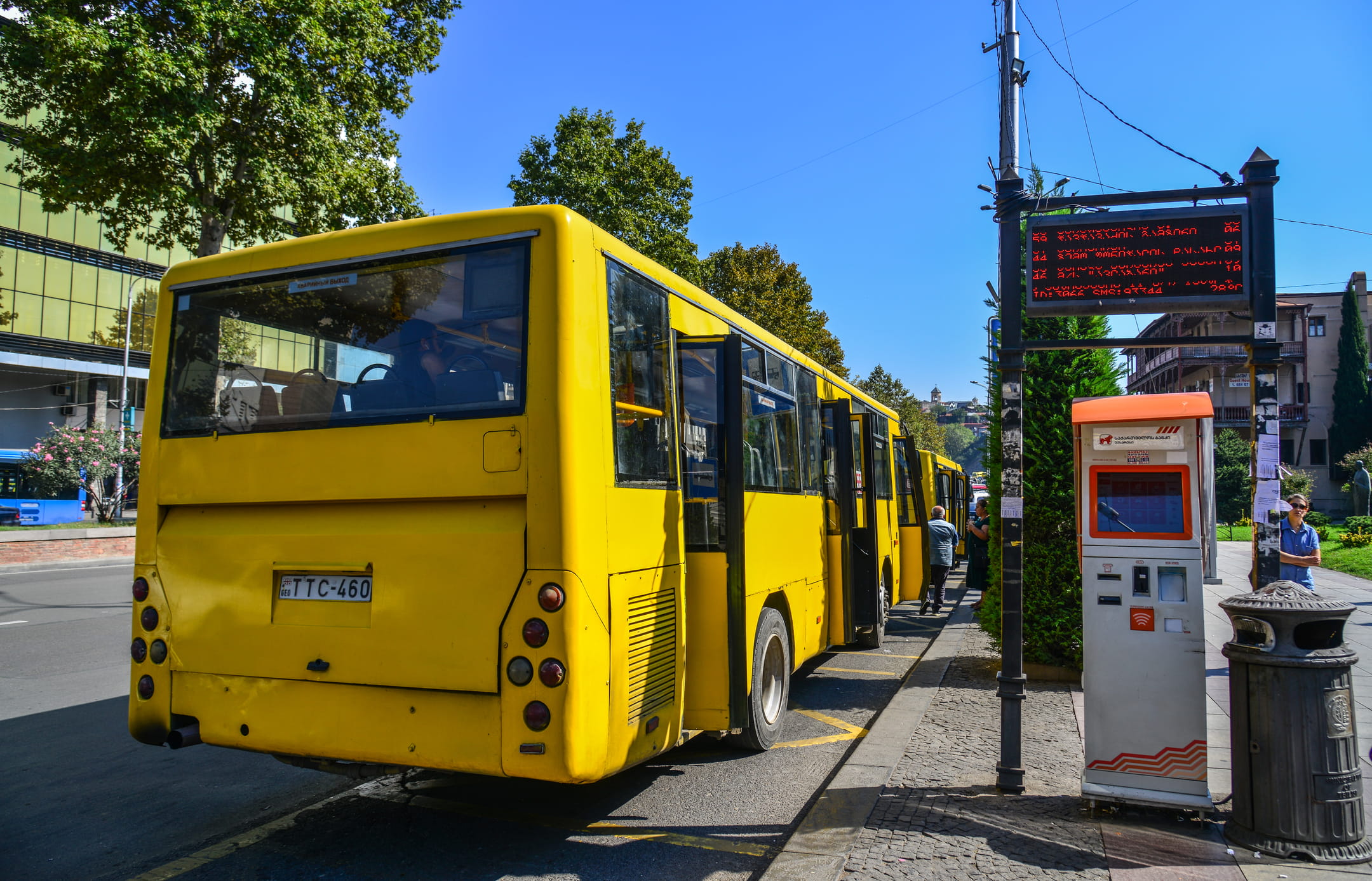 “Tbilisi’s transport policy and coping with the related challenges remains one of the primary objectives for the city municipality,” says Abuladze proudly. “Since public transport exists to serve our citizens, it should not cause problems while transporting passengers or negatively affect passengers’ health. Municipal transport can also play an important role in helping to avoid the further degradation of Tbilisi’s ecology. At local and central government level we have planned a set of complex and systemic actions and it’s a priority of the city municipality to further develop the transportation system and expand its use by the citizens and, in parallel, reduce the use of private transportation means such as the car.”

A number of activities and incentives have been implemented by the city municipality that are aimed at developing Tbilisi’s transportation policy. As well as the promised (and delivered) new vehicles, metro- and mini-bus routes have to be renewed and synchronised that will result in distributing passenger flows optimally, increasing access to those and other public transport systems. A 6th century city that is in need of a 21st century transport makeover is well on the way to realising its goals, all carried out without adversely or negatively affecting its unique heritage – an asset that brings that majority of tourists to the city in the first place.

“We have a very informative website as well as smartphone apps that can inform passengers about the arrival of buses at an appropriate bus stop. Passengers can also receive information on individual routes, plan their route and update themselves on bus movements in real time,” says Abuladze. “In Tbilisi, we have particular technological resources to make mobility within the city much easier. Therefore, in order to achieve effective mobility within the city, the implementation of a smart transportation system is underway. Eco-friendly transportation, popularisation and encouragement activities are also in hand. We want to welcome visitors to Tbilisi as it’s a beautiful city – but there has to be a public transport network that is equally beautiful in order for the tourists to travel around the city and see it as we want them to see it,” he concludes. “The people of Tbilisi, of course, also benefit from these improvements.

Read more about transportation and infrastructure:

Inside Intertraffic podcast 5: How to restore faith in public transport