A new era of signal optimisation is about to dawn, with Yunex Traffic preparing to launch Fusion – a system that will challenge SCOOT’s dominance of the market for the past 40 years. Intertraffic World editor Tom Stone finds out more.

Traffic signals have been optimised in London for many decades using an adaptive traffic control system known as SCOOT (split cycle offset optimisation technique), which was first developed by the UK’s Transport Research Laboratory (TRL) in 1979. Over the years SCOOT has gone through many different updates, but the basic architecture has remained the same, using sensor data to automatically adjust signal timings to adapt to current traffic conditions, thereby helping to even flows and minimise delays. Such has been the success of SCOOT in reducing delays – sometimes by as much as 15% – that it has been rolled out to cities around the world. But now Yunex Traffic is preparing to launch a rival to SCOOT, known as Fusion, which is currently in the final stages of testing with Transport for London (TfL).

Fusion follows the same basic principles as SCOOT in changing signal phase and timing (SPAT) to adapt to traffic flows, but has some important new functionality. First and foremost, it is able to handle much richer datasets than its rival. SCOOT relies mainly on loop and magnetometer detection and does not have functionality to distinguish well between different modes. It was designed and built around the car. Fusion, however, is focused on a multimodal future.

“Today it’s possible to get much richer data, which might tell us vehicle class, speed and destination,” says Dr Andy Hamilton who is lead product owner for Fusion at Yunex Traffic. “We are ready for that data, which means we can make better decisions for all the modes that are on the network. We can detect heavy goods vehicles, or a platoon of trucks, and traffic managers might want to get them through quickly to reduce stop-start air pollution. It means we can better meet city policies.” 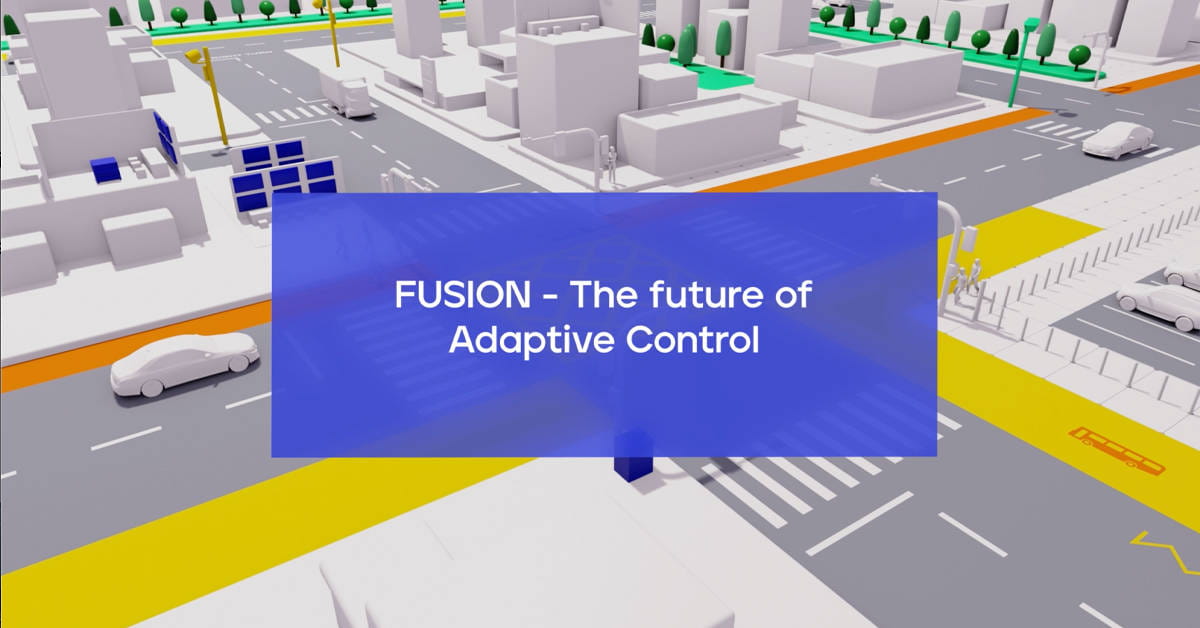 And it’s not just large freight vehicles that can be prioritised using Fusion. As more and more cities are looking to promote active travel and public transport use, so it is planned that Fusion can step in and assist with these policies.

But while distinguishing between different modes might require new roadside hardware, this is far from essential to the basic functionality of Fusion. It can be rolled out using existing infrastructure, with more advanced detection systems being brought online once they are ready, future proofing the system.

“We'll use the existing infrastructure that's on streets,” says Hamilton. “You're not having to rip up your road network and put in new sensors or anything like that, we'll use what's there for any typical SCOOT customer. Then we can add data in from our detectors and build up the picture – a digital twin – of what's happening on street. We can add occupancy detectors, radars, bike sensors, bus detectors, pedestrian detectors and push buttons, whatever’s out there.”

In the future it will also be possible to add connected vehicle data to Fusion, with trials underway by Yunex Traffic in Belgium to enable this. “In the UK, we don't have any connected vehicle projects yet,” says Hamilton. “But in Belgium, we're following a more well-defined architecture for how you get that information coming in.”

Fusion also builds in an in-depth, real-time predictive element to its architecture. “We'll forecast the future,” says Hamilton. “So, what will demand be in the next 10 minutes? The next five minutes? So that we can have the best information for our optimizers to run. When you're making adaptions, you want to know what the future state will be, not just the current state. That's why we have our forecast.”

Fusion is built to interface directly with existing UTC (Urban Traffic Control). “It works alongside UTC UX. And that's been through some serious improvements over the last couple of years as well. The important thing being you're looking at a couple of junctions, you're not looking at a single junction, typically, you're looking to get coordination across the region,” adds Hamilton.

Yunex Traffic has been working closely with TfL on the development of Fusion, with 11 initial test sites across London, known as the Living Lab delivering deployments of Fusion that create valuable real-world feedback.

“We're now expanding out the sites to really stress-test the system,” says Hamilton. “The best thing is a strange thing to say – TfL are trying to break the system for us! Which is great, because we want to launch a product that works. They're really pushing it to the limits, so we are able to see what's working and what’s not, and make changes.”

A key feature of Fusion, which has been part of the iterative development with TfL is its advanced user interface (UI). “There are challenges sometimes in configuring SCOOT, the way it was traditionally. So, we're trying to make this an easier process – more visual. We’re moving away from zeros and ones, it’s not a message-based system. Instead, you're able to make changes more easily and set up the system quickly and efficiently. And ultimately, aim towards the policy that you care about, such as active travel, or bus priority, or whatever it might be.”

Unlike SCOOT, Fusion aims to make decisions for an entire connected region, not just a node, looking at out how a big surge in demand on one approach will impact downstream junctions. But the development of this system created some challenges.

“Initially, we started off with the concept of exit lengths to inform us where the traffic was moving,” says Hamilton. “But we got feedback quite quickly from TfL, that's it was going to be a lot of extra effort that would not really be worthwhile. So, then the team instead updated how our routing algorithms work and how we model within the region. So now we're only modelling for any movements within the region, not for everything exiting, which simplifies the process.”

This feedback was one of the advantages of the Living Lab approach, which also informed Yunex Traffic that key performance indicators (KPIs) were not the ideal solution to deploy to move away from measuring degree of saturation, which was viewed as an outdated vehicle-centric approach. In the Living Lab the KPI approach saw cycle times going up, under low-flow conditions. “So now we're looking at underutilized green times,” says Hamilton. “And we're seeing some positive outcomes already in development from that. So again, lots of value from the Living Lab.”

Feedback from TfL also helped Yunex Traffic to refine the process of pushing upgrades to the system. “The Living Lab makes the development process much easier, that real-world feedback has been invaluable for the team as much as, I hope, for the customer.”

How has it performed?

As the official launch or Fusion approaches, Hamilton states that initial results of trails have been very positive. “We are seeing significant changes compared to SCOOT,” he says “You can see when Fusion is running under higher-flow conditions, SCOOT was starting to break down, and the delay was going up. Fusion was keeping it in a much more linear scale. We’re seeing good reduction in delay and stops in the real-world trials. This is a comparison to what is a well-calibrated SCOOT model. So again, some important results for us going forward.”

“Fusion will be launched the market very soon,” concludes Hamilton. “We're looking to do trials with a non-London customer in the next couple of months. I think customers will like it, particularly with its a user-friendly interface. We're trying to make life a little bit easier in terms of moving away from SCOOT towards Fusion in the not-too-distant future.”

This feature represents a preview of content from the forthcoming Intertarffic World 2023 magazine. Subscribe or find out how to get your company featured here https://www.intertraffic.com/intertraffic-world-magazine/