Electromobility: a case of when, not if

Intertraffic caught up with two experts in this burgeoning field over two articles: Neil Wallis, Head of Communications at Zemo, formerly the Low Carbon Vehicle Partnership; and first Thomas Neumann, Policy Officer at AVERE, the Brussels-based European Association for Electromobility.

Countless industry sectors have suffered immeasurably over the last 19 months but a recent study showed that this isn’t the case across the board.

Companies involved in the Do-It-Yourself market reported that 2020 into 2021 saw an unprecedented increase in consumer spending on home improvements. In the UK alone more than £110 billion (€130 billion) was spent on decorating and maintenance projects, an increase of 30% on 2019 figures. And, more pertinently, the same can be said of the electric vehicle market.

It was revealed only this week that the Tesla Model 3 has become Europe’s best-selling car (with 24,600 units sold in 26 European countries in September) – the first time that honour has gone to anything other than a vehicle powered by the internal combustion engine.

This is clearly great news for the Electromobility sector but now that the world is gradually feeling like the one we remember from before the pandemic, what does the future have in store for electric vehicles, electric driving and the still-aspirational achievement of private car ownership?

“Fundamentally, I think, the growth momentum, and the market uptake that we're starting to see is incredibly exciting,” enthuses Neumann. “Last year for electric cars, the industry moved very rapidly. There were announcements from a number of OEMs to phase out internal combustion in the next few years. Volvo, for example, said that by 2030 it won’t be selling ICE cars anymore. We see that even the really big players like Volkswagen are driving a very aggressive electric strategy, where they have in previous years been more hesitant to choose that route.”

And it’s not just the OEMs that are driving the electromobility agenda, which is also something that Neumann is delighted about.

“We see this approach mirrored on the policy side as well, which is also very exciting. The European Commission has now said that we will see the phase-out of internal combustion that has been proposed by 2035. We finally see a big push to get charging infrastructure installed, mirrored also on the national level.

“If you look at the German coalition negotiations right now, it’s actually talking about pre-empting or preceding the Commission's stated aims of ICE phase-out by 2035 and actually going earlier. We'll have to see, but there is a lot of exciting momentum for electromobility. The COVID-19 crisis has kind of acted as a catalyzer for all this,” he says. “We’re in a moment of such massive disruption and also at a point where we may need to rebuild, so you might as well rebuild in a way that makes you future proof.”

“You might as well rebuild in a way that makes you future proof.”

Perhaps this is where we should have started the conversation, but what does AVERE, the European association of electromobility after all, define as the term that features in its mandate?

“Electromobility is any kind of mobility driven by an electric power trains as opposed to traditional power train,” Neumann replies instantly. “We focus mainly on road transport but electric mobility includes micro-mobility, such as e-scooters, as well as cars, vans and heavy duty transport, such as electric trains. We're getting into a point where we're actually talking about electrified ships and even planes,” he continues. “DHL is working on pilot projects where short-haul flights will be electrified. So really, any mode of transport can be electrified, and that basically means having a battery in an electric drive train. We are pushing for direct electrification wherever possible because it’s just much more energy efficient.”

The EV naysayers have, for several years, maintained the one negative aspect of electrification is not only the potentially prohibitive purchase costs of the vehicles themselves, but also the reportedly higher manufacturing costs, not to mention the widely touted theory that production emissions are higher for EVs than for ICEs. How much truth is there in those often deliberately negative press reports?

“Traditionally, I think there has been some truth to that and a big part of that has been the batteries,” admits Neumann, “but we see that battery technology is developing very rapidly. Water usage is going down – the cost of raw materials that you need to build the battery is going down while the supply chain is being cleaned up. The emissions from producing a battery have gone down massively. But,” he adds, “if you purchase an electric vehicle it's probably been a bit more expensive to produce and it's probably a bit higher in CO2 emissions production-wise, but to counter that EVs quickly make up for this throughout the first years of ownership through lower emissions and running costs.”

However, that being the case, the gaps have decreased significantly over the last couple of years in particular.

“They have, and they will continue to come down massively, because we're just starting to scale up,” says Neumann. “The cost will fall dramatically and we're also at the start of technological development, so you have to keep in mind that internal combustion engines have been on the roads for decades and at mass scale. There has been a lot of R&D going into battery technology and it’s developing at a pace that internal combustion currently can just dream of.”

Next steps for electrification

In terms of imortant next steps, where is the electromobility sector heading and, perhaps even more importantly, is it heading in the right direction? Neumann is clearly certain that it most certainly is.

“When we experience the massive uptake we’re predicting, then we need to make sure people can charge.”

There’s good news on that front, with Neumann a confirmed fan of the European Commission’s proactive approach to infrastructure implementation.

“There are some interesting proposals from the Commission, most notably fleet based targets that have been proposed under the alternative fuels infrastructure regulation, where you have to have a certain charging capacity per electric vehicle in the fleet. This ensures, at least in principle, that for every car there's additional chargers that are being installed,” he explains. “But we also need to make sure that there are the right kind of chargers in the right locations, so people that don't have their own driveway might still charge overnight, in the street, near their home.”

Charging channels in place, there is still the thorny issue (and much discussed topic) of consumer perception. What can AVERE do to lessen the public’s initially negative mindset when it comes to electric vehicles? Is it is even AVERE’s job to do that? Or is it is it the job of AVERE’s members, the vehicle OEMs, to actually target those people who are undecided, the “floating voter” and try to tempt them to join the electric revolution?

“With EV consumer reception the issue is that technology has been developing so rapidly there is still the perception that's maybe not based on the current state of technology.”

“Yes, that is part of our mission. We are getting closer to the tipping point. In the 1980s when wearing a seatbelt was made mandatory, German people were rioting!  People don't want to be forced to do things and it was seen as an infringement of our freedom. With EV consumer reception I think the issue is that technology has been developing so rapidly there is still the perception that's maybe not based on the current state of technology. ‘Oh, but in production there is so much CO2 emitted’ and ‘Oh, but I can't go to work and back without having to recharge on the way’. Modern EVs have a 400 kilometer range and can fast recharge within half an hour or so. Misperceptions among consumers will be an obstacle that will have to be tackled by policy, by industry and advertising by word of mouth between consumers. ’My neighbor has an EV and he doesn't run out of charge and have to be towed back to his house’.”

One contributory factor to the long-term success of electromobility is the second hand electric vehicle market. Whereas only two or three years ago the EV sections of used car websites were populated with a handful of Teslas and Nissan Leafs, now those pages have hundreds of pre-owned models for sale (a quick search on an unnamed used car website found almost 400 second hand Teslas available in the UK alone).

“Well, if you look at the current structure of overall car sales you see that most consumers actually buy used because most households don't really have the capacity or the money to buy a new car, especially at the moment. And, importantly, over half of new cars in the EU are sold to corporations as company cars. These end up on the second hand market after two to four years, and they become affordable to consumers. The corporate market is a massive driver of uptake in the private sector, so therefore incentivising EV uptake by companies will really help satisfy the demand for used EVs.” 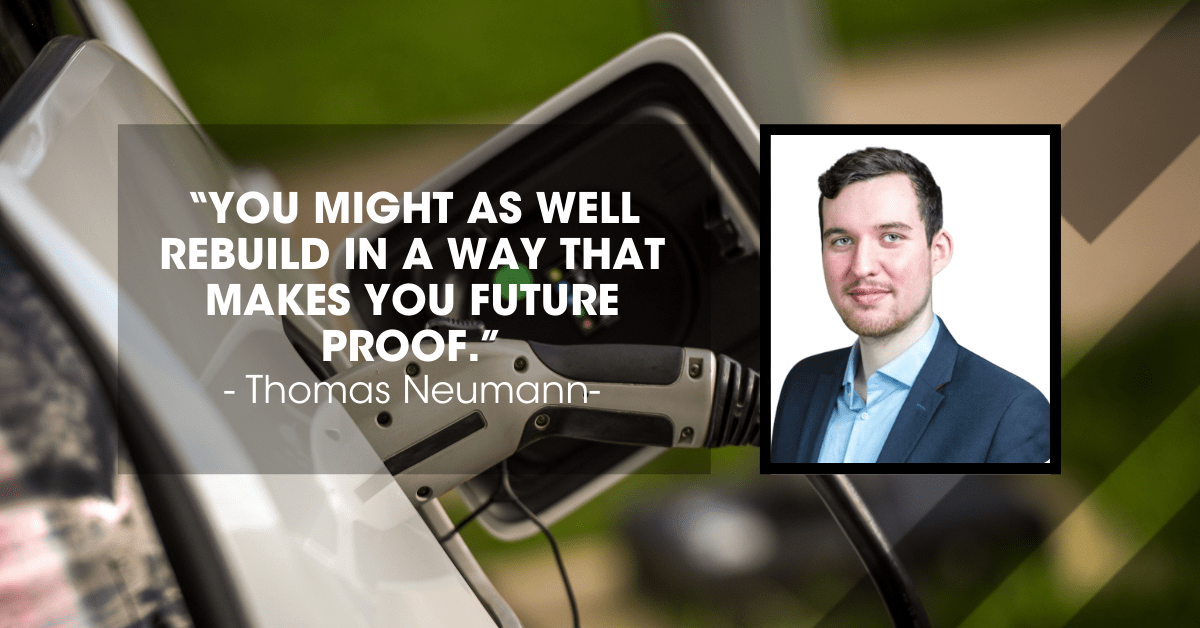 Norway is always used as an example of a country that grasped the EV nettle very early but, as Neumann says, it’s quite an isolated example as it’s an oil-rich nation. There are other examples of early adopters of EVs that haven’t had quite the sustained publicity but have been almost equally as successful.

Says Neumann: “Comparing two leading markets in Europe, the Netherlands, for example, has a much stronger focus on public charging infrastructure. Norway, on the other hand, is much more focused on enabling people to charge at home, combined with purchase incentives to drive the uptake. EV purchase incentives are a good instrument, especially in markets where the uptake hasn't yet taken place. On the other hand they are very much a temporary instrument because the EVs will just be cheaper on their own by 2026 or 2027. Incentives functioned very well in Norway, and it can function very well in other European markets, but in a few years, where the uptake has taken place, you won't need them anymore”.

“One thing I would hope that we're not talking about is supply chain, raw materials and semiconductors because they can be a significant bottleneck, but I also hope, and I'm quite optimistic, actually, that the charging debate and range anxiety will fade out of public discussion. One thing I do think will be interesting is how do we want our idea of electromobility to function? We might focus a bit more on the details and national models. Do we want to charge at home? Do we want to charge more quickly? Do we want smart charging?”

So, concludes Neumann, in terms of transition from ICE to EV, it’s a matter of when and not if.

“We’re talking about how we make the transition, and how we move conveniently as consumers take maximum advantage and incorporate them in to their daily lives. So these kinds of debates might be more prominent because we won't be at the ‘if’ stage anymore.”

Mobility Hubs | The multimodal stations at the centre of everything