Following on the first part of this Intertraffic series on the smart urban mobility efforts of Slovenia’s capital, Ljubljana, and the city of Novo Mesto, we now focus on the developments in the capital. Various projects in Ljubljana, Novo Mesto and Celje are making the rest of the Balkan region, and Europe as a whole, take note.

Ask any Slovenian what they think their country is best known for and the answers are likely to be mountains, lakes, ski resorts, salt, its tiny but spectacular coastline and Jan Oblak, one of Europe’s best goalkeepers currently plying his trade at Atletico Madrid.

It’s not as though any of these images are incorrect or inaccurate, but the country, bordered by Italy, Austria, Hungary and Croatia, is also making admirable strides into smart city territory that are worthy of wider attention.

Ljubljana, the beautiful capital, is a case in point. As Alja Bebar, a member of the Mayor of Ljubljana’s administration team, explains to Intertraffic, the achievement of smart city status is a long process and what might be considered smart in one city might not be appropriate or even required in another. “In 2007 we set out on the path of sustainable development of the city with Vision Ljubljana 2025, and we are still pursuing the goals we have set – to ensure a high-quality life for all our citizens in a green, safe, clean, solidary, tolerant and comradely city. “

In the vision, the city identified 93 development projects that have already been carried out or are in various stages of implementation – but the work is far from over.

“We have implemented over 2400 other projects for an even higher quality of life in the city, and we are currently preparing a new Vision Ljubljana until 2045,” she adds. “Since 2007, over 17 hectares of the city centre have been renovated, transforming them from motor traffic areas into public areas reserved for walking, cycling, socializing and creating public life. During this time, all parking lots in the city centre squares were demolished, and the streets and embankments were renovated and planted with greenery to create high-quality public areas, for which we also received the European Award for Urban Public Space. Today, Ljubljana can boast about the largest pedestrian zone among European cities.” 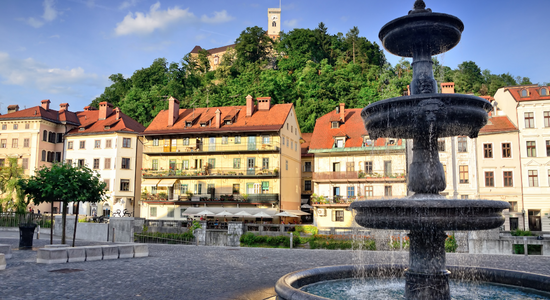 Cyclists use over 310km of maintained cycling lanes, the BicikeLJ bicycle sharing system boasts 83 stations with 830 bikes and, as Bebar explains, Ljubljana is also striving for passenger- and environment-friendly public transport. /p>

“Already 50% of the city passenger transport fleet consists of natural gas or hybrid powered buses, in addition, we offer free transportation with seven Kavalir electric vehicles, and the Urban electric tourist train is also available. We encourage further development of electromobility with various measures – among other things, there are electric car and electric bicycle sharing systems available in Ljubljana. The city was chosen as the best e-mobility city in Slovenia and the second most car-sharing friendly city in the world in the category of up to G750,000 inhabitants.”

We encourage further development of electromobility with various measures – among other things, there are electric car and electric bicycle sharing systems available in Ljubljana

THE GREENEST OF THE GREEN

Even though Ljubljana is already among the greenest capitals in the world (green areas cover as much as three-quarters of the city), the authorities are continuing to plant new green areas in the city. Says Bebar: “We are turning brownfield sites, neglected and unused parts of the city into new green areas, thereby contributing to mitigating climate change and improving the quality of leisure time for residents and visitors to Ljubljana. In the past 15 years, we have planted more than 40,000 new trees and created over 120 hectares of new green park areas, mostly on former brownfield sites. We are proud that Ljubljana is also recognized as a ‘Tree City’ within the framework of the Tree Cities of the World programme.”

Among the results of the many quality of life improvements that have been implemented so far are the many international city awards that Ljubljana has received.

At the beginning of this year, Ljubljana was voted the European Best Destination 2022 by travellers from all over the world

“A real turning point for us and a great recognition for our work in this area was winning the title of Europe Green Capital 2016,” says Bebar proudly. Last year the organization European Best Destination declared us the best green capital among 20 European cities, and at the beginning of this year, Ljubljana was voted the European Best Destination 2022. This was decided by travellers from all over the world, as many as 92% of votes, a record number since 2009, came from other countries, which proves the immense international appeal of Ljubljana.”

With the capital applying to join the mission of 100 carbon-neutral European cities by 2030, Ljubljana is pursuing its fundamental mission – to increase the quality of life for citizens and visitors to the city.