Electric vehicles (EVs) require special charging infrastructure. How is this additional pressure on parking spaces being managed around the world?

Not so long ago, electric vehicles were the future. Now, thanks to government incentives and low running costs, they are here, and here to stay – which can happen quite literally when their batteries run flat. To make pure EVs a viable option for long-distance travel, public charge points have to be plentiful and easily accessible via parking bays, and this is an area where the future is finally meeting the present. “As electric vehicle sales take off, charging infrastructure is keeping pace,” says Edward Jones, EV manager at Nissan. “Combine that with constant improvements in battery performance and we believe the tipping point for mass EV uptake is upon us.” That’s easy to say if you’re selling EVs, but Nissan has done the math, and based on the decline in petrol stations – from 37,539 in 1970 to just 8,472 at the end of 2015 – and the increase in UK charging locations from 913 in 2012 to 4,153 at the most recent available count (September 2016), the number of petrol stations and public charge locations is set to converge at around 7,900 in 2020. Each EV charge location has on average 2.8 connectors (according to the Zap-Map database), but while that may still be some way off the 7.3 pump average at a traditional filling station in the UK (according to the RAC Foundation), its clear that given sustained growth connectors could easily outstrip pumps before the next decade is out.

And it’s not just the manufacturers that are driving change. The UK government announced earlier this year that it would pump £40m (€47m) into a number of cities that had submitted proposals to the Go Ultra Low City Scheme (GUL), a project supporting the take-up of EVs across the country. Winning bids included London, which will receive £13m (€16m) to create “neighborhoods of the future” that prioritize ultra-low-emission vehicles (ULEVs), and Milton Keynes, which gets £9m (€11m) to open an Electric Vehicle Experience Centre, make parking free and open up bus lanes for EVs. Other beneficiaries are Bristol, whose £7m (€8m) will in part go toward creating 80 charge points, and Nottingham and Derby, whose £6m (€7m) will create 230 charge points. GUL is just one element of a £600m (€711m) package of measures from the Office For Low Emissions Vehicles, among them £400m (€474m) of individual plug-in car grants, to be awarded by 2020 – that year again – plus investment into R&D for longer-lasting batteries. It’s a commitment to turning our streets electric and changing the way we think about parking. It will take time, though. “We have a five-year plan,” says Brian Matthews, head of transport innovation for Milton Keynes Council. “Making parking free for EVs is straightforward – a quick win. But we also have to understand the infrastructure needs.” Milton Keynes has 25,000 parking spaces, of which 200 have charge points. “Around 70% of these are reserved for plug-in vehicles, and the rest can be used by other motorists if they’re free. But many EVs park in these bays when they don’t need charging, so we’re going to make every one of our 25,000 spaces available for EVs to park for free, if they don’t need charging.” 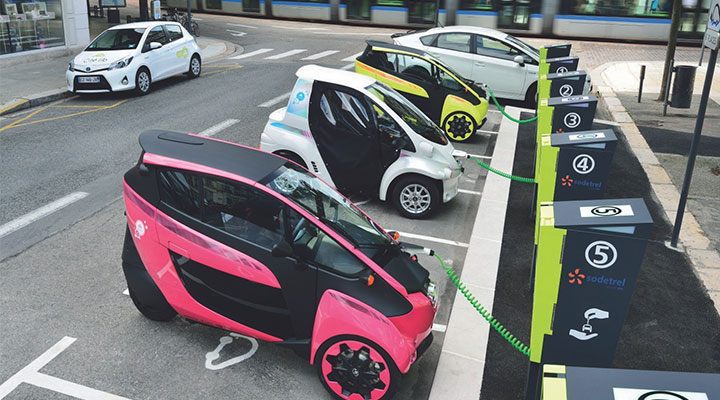 Do dedicated parking spaces for EVs adversely impact parking for other cars?

New beginnings
Milton Keynes has a head start, but the challenges are greater for cities that don’t already have charging infrastructure. “Through GUL, Nottingham is seeking to introduce parking offers to give some incentives to ULEV drivers in the city center NCC-owned car parks,” says Rasita Chudasama, principal transport planner at Nottingham City Council. “Our partners, Nottinghamshire County Council and Derby City Council, may wish to introduce similar offers in their areas.” This mention of partners highlights the challenges in implementing a uniform policy regionally, let alone nationally. “Each car park is managed differently, so the offers will have to vary depending on the nature of the car park and the deal that is negotiated.

“There are seven Park & Rides in Nottingham that offer 5,000 free spaces for drivers,” she adds. “We’ll consider discounted or free onward travel for EV drivers as we develop our charging network. But there’s also the need to consider the complete package – parking may still be charged for because operationally it’s difficult to differentiate a ULEV from any other car entering the car park, although free electricity could be provided from those charge points.” Charging usually comes at a price. “The cost to the user will be subject to the procurement of the operator. Nottingham will evaluate payment models that offer introductory rates, time-limited offers and discounts as part of the tenders,” says Chudasama. “Previous schemes – for example Ecotricity and Plugged in Midlands – offered free electricity but, given the increasing levels of uptake and charge point usage, a fee is being introduced because the profit margins for selling electricity are so slim.”

Then there is the thorny issue of enforcement, which Matthews says is actually quite straightforward. “Wardens have handheld devices that read the number plate and tell them if the car has a permit, has paid by phone or is an EV. We’re trialling cameras in the town center, but these are more to survey car parking than they are for enforcement.” This is because Milton Keynes, like a lot of towns and cities, is developing an app – called MK Motion Map – that will deliver real-time parking, traffic and public transport information to users. Nottingham’s Chudasama, however, says there are some issues: “Enforcement of bays through camera technology isn’t possible due to national legislation restrictions. There are also deficiencies in the DVLA database because it’s not immediately possible to determine whether a vehicle is an ULEV. That said there are penalty schemes in place for EV drivers who ‘hog’ the charge point – in places ranging from London to Norway ... schemes where the user has a block of time and, if the vehicle is not moved within a period after that, the user is charged a fee as a disincentive.”

Peace of mind
All the evidence suggests that EV charging takes place at home or, thanks to forward-thinking and incentivized employers, at work. Limited EV range makes installing charge points at service stations logical, but why the need for widespread city center charging networks that take in car parks, shopping centers and on-road parking bays? Ultimately, the charge points are a necessity even if they are largely for reassurance, and they have to be seen to be keeping up with EV sales to encourage more uptake.

“Based on our experience, the charging infrastructure and uptake of EVs are moving together at the right pace,” says Nissan’s Edward Jones. “However, the average UK commute is around 10 miles, so most Nissan Leaf owners only use public rapid chargers about 20-25 times a year – yet they’re racking up more annual miles on average than internal combustion engine drivers: 10,500 for Leafs versus around 8,000 for ICEs. Because owners always have charge point at home they’re not reliant on public charging in the same way petrol-powered cars rely on fuel stations.”

It’s about perception, then. “Range anxiety or more accurately ‘charger anxiety’ has been an issue raised locally and nationally as a barrier to owning an EV,” Chudasama agrees. “Where these chargers are located – at car parks, Park & Rides and suitable street locations – is an area GUL is looking to address.”

Making parking free for EVs does raise another question: will the cost of parking go up for other motorists to pay for the decline in the council’s parking revenue? “I don’t think so,” says Matthews. “When we installed charge points five years ago we recorded 90 charging events in the first quarter – that was probably the same car every day. Now that figure is 6,000, which is tremendous growth, but you’re still talking about a relatively small number out of 25,000 spaces.” “Trade-off within the council between offering the right level of incentives for ULEV drivers to encourage uptake while also maintaining income levels from parking is a political decision that will need to be taken,” Chudasama says. “But it’s unlikely that installing EV charge points would increase the cost of parking for everyone else – maybe the EV driver if they are expected to pay for parking and the use of the electricity from the charge point.” And, of course, policies will always need to be monitored, says Brian Matthews, Milton Keynes Council’s head of transport. “We’ll reflect on the cost of parking after three years, but for the council it’s not really about the money – it’s about the wider benefits of people driving electric vehicles.”

A long road ahead?
Nottingham City Council’s principal transport planner, Rasita Chudasama, talks us through some of the logistical and technological challenges of installing an EV charging network.

Land ownership
“Who owns the land? NCC-owned land is easier to work through, while large organizations such as national supermarket chains often require internal sign-off that can take months.”

Power availability
“A site may be on the strategic network and seem viable, but if there isn’t sufficient power to the site the charge points cannot be powered without power upgrades via substations. This is particularly the case for rapid charge points that require more power.”

Maturity of the market
“There’s a small number of charge point providers, some with limited track records, due to this being new technology. Coupled with the fact that some charge point providers usually manage small contracts – in the thousands of pounds as opposed to millions – this scale of investment hasn’t been tested.”

Demand versus supply
“Key to the success of a charge point network is to get the right infrastructure in the right place at the right time. Given the unknown levels of uptake there may be, it’s hard to project the level of demand, but it’s important to get the scalability right.”

Interoperability
“There are various charge point payment systems, including RFID smartcards, PAYG apps and credit/debit cards, and if the customer is not subscribed to a supplier’s network they won’t be able to access the charge point – so they have to carry around various RFID cards or subscribe to numerous suppliers. The government plans to implement national minimum standards for charge point providers, which may help to simplify and integrate the services.” 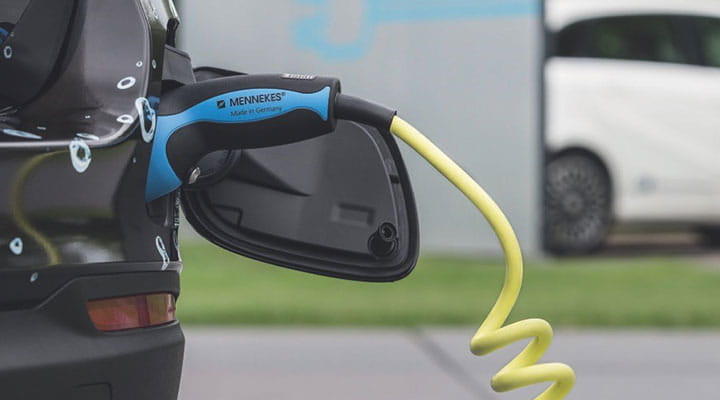