New light on the highway for safety and the environment

The Italian highways are focusing on a new lighting system applicable to safety barriers which, through LEDs, allow optimal and environmentally friendly light to be diffused from below. A school case: that of the Spinea junction on the Passante di Mestre (Venice), where CAV, Concessioni Autostradali Venete, was the first to install, in 2020, the GuardLED technology, which also enhances safety thanks to the polyurethane cladding of the neam, to repeat the operation in 2022 with its evolution G-Light, with even more performing light. Roadlink, the developer, will be among the exhibitors at Intertraffic 2022. G-Light is a device applicable under any type of guardrail. Its plus: it never affects its performance and characteristics, so there is no need to resort to new certifications. 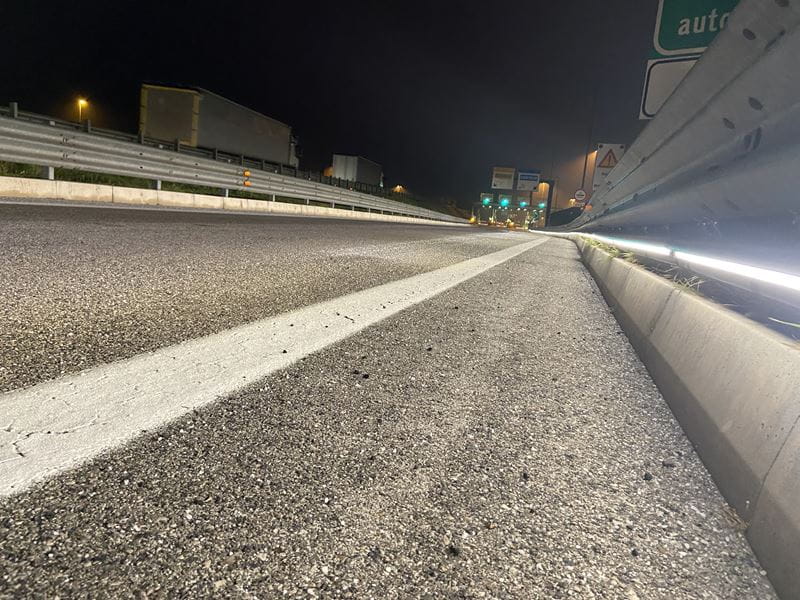 The first highway lights with high eco-sustainability and increased safety were turned on in May 2020 near the Spinea tollbooth, Passante di Mestre, not far from Venice, Italy. To commision them, CAV, Concessioni Autostradali Venete, the infrastructure authority who, like other prudent authority, in that first period of great closures from the Covid-19 pandemic was multiplying its efforts to modernize the network and increase its safety standards.

In May 2020, the first eco-sustainable highway lights, also because they radiated (indeed, radiate) their lumens from below and no longer from above like traditional street lamps, were those of GuardLED, a combination of the words "protection" and "LED" that has brought a new wind, a new light, in Italy, in the field of road equipment. CAV, the highway authority headed by president Luisa Serato and CEO Ugo Dibennardo who is part of Aiscat, the national association of highways, and is co-owned by Anas, the main Italian road authority, immediately believed in the potential of this technology, conceived and developed by an innovative startup located in Brescia, Roadlink Italia, which will be among the exhibitors of Intetraffic Amsterdam together with the parent company VITA International and partner AstepON.

What is GuardLED explained well, among others, the highway itself: a polyurethane cladding with housing for LED strips to be applied to guardrails, just as was done at Spinea, which makes the device not just a passive safety instrument - increased, moreover, thanks to the contribution of polyurethane whose softness is also an extra protection for motorcyclists - but also active safety, provided by lighting. In addition, the "S factor" should be emphasized, which means safety but also environmental sustainability. The new light of the LEDs and above all its orientation does not produce light pollution, thus protecting the surrounding environment to the maximum degree. Finally, applying such a sustainable, smart and light coating to a safety barrier also means avoiding the use of poles or other bulky lighting supports. After the double security, therefore, also a double sustainability.

“The luminance tests carried out - explained Sabato Fusco, technical director of the Concessioni Autostradali Venete - have left us very satisfied, as the lumen values correspond to the giudelines of the regulations. This technology allows us to optimally illuminate the carriageway, allowing us to not have to resort to poles or other supporting structures. Among the advantages of the installation, in addition to the considerable energy savings guaranteed by the LED technology, I emphasize the simplification of maintenance operations, with considerable benefits also in terms of operator safety, completely eliminating the risk of falling from above". CAV, in addition to appreciating innovation, is also studying it in its development prospects at a broader level: "In addition to being very valid from the lighting point of view - explained CAV's TD -, GuardLED has excellent dimmability, that is easily maneuverable. In addition, its shaft would allow great advantages to those managers who intend to implement their equipment in a Smart Road or Smart Mobility key without necessarily having to resort to more invasive works on the body of the infrastructure. Our road network is entirely wired with optical fiber and currently we do not have this need, but I am thinking of large extra-urban networks that could get significant benefits from a solution like this".

The 2020 installation by night

Another perspective opened by GuardLED concerns the transformation of infrastructural places currently very dense with energy-intensive elements into totally eco-sustainable scenarios, made such by introducing agile and innovative technologies such as the one tested. Consider, for example, the points of the network near large urban settlements or other infrastructures, such as airports, populated by looming light towers. The green note is not negligible in the vocabulary of a manager who has been focusing strongly on the environment for years, as evidenced by the project of the “Passante Verde”(the Green Bypass). And green, as we have seen, is also the light of GuardLED, a "champion" against light pollution. "Another positive point - concluded Fusco - is then given by the cladding, which protects and further protects the barrier from atmospheric agents, increasing its useful life. Finally, from a maintenance point of view, I do not see any contraindications".

GuardLED innovation, therefore. But how can this Made in Italy technology be framed from the point of view of safety device certifications? The complete polyurethane cladding plus LED, the one installed in Spinea in 2020, can be installed - Roadlink informs - only on barriers subjected to specific crash tests, i.e. with the same GuardLED applied on models in class H1 and H2 lateral side. Following this common thread, however, an absolute novelty is given by the fact that alongside the GuardLED mother technology a daughter technology has already evolved, which is arousing the enthusiasm of various road operators, so much so that its applications have multiplied. North to South Italy. It is called G-Light, the GuardLED “light”, and a device applicable under the guardrail beam, of any type of guardrail. Its plus: it never affects its performance and characteristics, so there is no need to resort to new certifications.

If GuardLED is a unique multiplier of values, in terms of safety (due to its function as an additional shock attenuator) and environmental sustainability, G-Light is characterized by its extreme versatility, focusing attention on light, also in this case effective, clean, but also evolved, due to a search for innovative solutions that has never stopped and is still in progress. “During the recent years - explains Irina Mella Burlacu, CEO of Roadlink Italia - the device has stood out for its increasing performance aimed at reducing both energy consumption and the dispersion of light that is not direct on the road surface. As for the first aspect, we worked on the LED Strip, while for the second we studied a cover that would further reduce the light emmission upwards and therefore light pollution". G-Light 2022: the new generation of the technology with light diffused from below

A field check? Precisely in Spinea, where in January 2022 the daughter-technology G-Light reached the pioneer parent GuardLED in an installation project once again in collaboration with CAV. A common trait of the two devices (innovation in innovation): the use of a particular Khatod asymmetrical optical lens, responsible for the uniform distribution of light on the roadway from a height of only 40cm from the ground.

Compared to 2020, the GuardLED 2022 technology, on the other hand, is able to guarantee a higher average illuminance, a lower consumption per meter, as well as an increase in the maximum length of the installation section. With small adjustments and improvements, as anticipated by the developer itself, it was then possible to distribute the light even better, concentrating it in ever greater quantities along a two-lane carriageway. "G-Light - concludes Roadlink - fully complies with street lighting regulations (UNI 11248 and UNI 13201) by meeting the requirements for C0 conflict zones (lighting category based on street lighting with the highest requirements). The system is also equipped with dimming in order to be used even in those cases where lower illuminance values are required, and can be easily adjusted to different road situations (from the slope to the irregular road surface)".