Infrastructure megaprojects – including a new tunnel and bridge across the Bosphorus – may have helped to combat jams in the Turkish capital in the past two years, but there’s still much work to be done…

For the 25 centuries between the pontoon crossing of Darius the Great in 513BC and the opening of the Bosphorus Bridge in 1973, the only way across the Bosphorus was by boat. This narrow sea-channel has long been both a gateway and a boundary, linking Russia’s Black Sea ports with the Mediterranean while delineating Europe from Asia and bisecting the transcontinental megacity of Istanbul. This tumultuous metropolis uniquely straddles the intersection of two ancient and contending realms and is home to upwards of 15 million souls – some two million of whom must cross the Bosphorus daily. Indeed, for all its illustrious history, in 2014 Istanbul achieved the dubious distinction of being ranked by the TomTom Congestion Index as the most gridlocked city on Earth.

Working at maximum capacity
To the original 1973 Bosphorus Bridge (renamed the 15 July Martyrs’ Bridge after the failed coup of 2016), a second bridge, the Fatih Sultan Mehmet Bridge, was added in 1988. Each almost a mile long, the two eight-lane suspension bridges accommodate around 190,000 and 135,000 daily crossings respectively. Both operate electronic tolling and employ reversible lanes to optimize capacity, since a majority of morning rush-hour commuter trips are westbound from Asia to Europe – and vice versa in the evening. Nevertheless, by 2014, gridlock on these bridges was commonplace, even at 2:00am, while several of the delay hot spots mapped by TomTom are their immediate approaches, so that getting to the Bosphorus had become as problematic as crossing it. 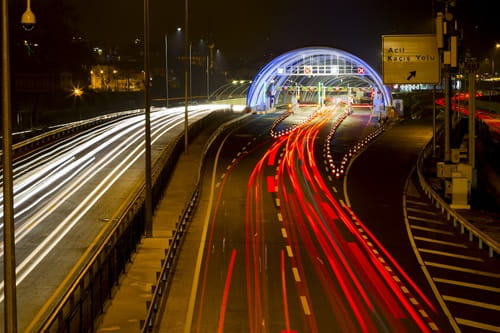 Building our way out of trouble?
President Erdogan’s Turkey is engaged in a series of megaprojects with a net spend exceeding US$400bn. Two of these nowspan the Bosphorus.

The 1.3-mile long (2.1km) Yavuz Sultan Selim Bridge, which opened in 2016, is the world’s second-highest bridge at 1,089ft (332m). Carrying eight motorway lanes and a double-track railway across the strait at its northern mouth, it will ultimately form part of the Northern Marmara Motorway, allowing transcontinental traffic to bypass Istanbul city altogether.

At the seaway’s southern end, the 3.3-mile (5.4km) Eurasia Tunnel also opened in 2016, a double-decked structure carrying two lanes of tolled traffic between the central neighborhoods of Kazlıçeşme on the European side and Göztepe in the east via nine miles (14.6km) of associated road network. It purports to reduce journey times by 85 minutes. This twin opening followed that of the Marmaray rail tunnel, partially operational since 2013 after archaeological discoveries during excavations delayed full opening until late 2018.
These grand initiatives embody a sense of resurgent national prestige on the world stage. “Istanbul is a city which shapes history,” said the then-serving Prime Minister Ahmet Davutoğlu in 2015, in connection with a further project, the four-mile (6.5km) Great Istanbul Tunnel, scheduled for completion in 2020. “This three-level megaproject will be the signal flare of the Turkish Republic, the fourth global state
in Istanbul, after three empires. The tunnel will both reduce the traffic load on the bridges and enable maximum time saving.”

With the Eurasia Tunnel and Yavuz Sultan Selim Bridge operational, Istanbul dropped to 6th on the 2017 TomTom Index, its congestion level (the average increase in travel time over free-flow driving) down from 58% to 49% – although some question the role of new road crossings in reducing delays.

“The government guaranteed that 25.6 million vehicles per year would use the Eurasia Tunnel, but in the first year, only 15.6 million vehicles passed through, so the government had to pay TL123 million (US$20m) to ATAS, the operator,” says Arzu Tekir, head of strategy and business development at UrbanARBA, Smart City Marketing and Communications.
“In 2017, 41,000 vehicles passed daily, although the guaranteed figure was 65,000.” Tekir is dubious about the impact of new roads serving the tunnel on Istanbul’s culturally sensitive Historical Peninsula and questions the efficacy of car-centric projects in actually reducing traffic. Promoting private vehicle use appears an inefficient remedy to congestion given current occupancy figures: according to Tekir, the occupancy rate on the Bosphorus Bridge is around 1.5 passengers per vehicle and the majority of cars in the Eurasia Tunnel are low-occupancy.

Multimodal solutions
Tekir attributes recent easing of congestion to a rapidly expanding Metro system feeding into the partly operational Marmaray rail tunnel, a conduit for current daily ridership of 185,000. Another major factor is Metrobus, a bus rapid transit (BRT) system opened in 2007. This follows a 31-mile route (50km) on the Istanbul ring-road from Beylikdüzü in the west to Söğütlüçeşme in the east, using dedicated bus lanes and crossing the first Bosphorus Bridge. Though Metrobus has a daily ridership of around 800,000, it has been a victim of its own success in terms of overcrowding. “The BRT system reduces commute times from the European to Anatolian side from two hours to 45 minutes,” explains Tekir, “but it has become saturated – so people are not happy, but they use it because it is fast.”

There are a number of passenger ferries, with the fastest Bosphorus crossings taking just 15 minutes. The largest operator is former municipal entity İstanbul Deniz Otobüsleri (IDO), privatized in 2011, which currently runs a fleet of sea buses, catamarans and car ferries. According to Arzu Tekir, ferry crossing is the loveliest way to cross the Bosphorus, but, despite being the only option available until 1973, is now much neglected. “Sea transport is only 3.3% of the modal split,” she says, “but 64% of Istanbul’s population is within 30 minutes’ travel to the piers to commute to the other side. To create a liveable and sustainable space you must focus on sustainable transport options instead of expensive projects.”

In an attempt to exploit sea transport’s potential, UberBoat ran a 2015 motorboat ridesharing pilot across the Bosphorus. But, according to Tekir, Uber failed to gain much purchase on Istanbul’s roads, in part through the influence of a powerful taxi lobby. Mobility applications such as Moovit and Trafi, meanwhile, do provide a popular means of making efficient use of interconnecting modes in Istanbul. “The average age in Turkey is 30,” says Tekir. “We are very young and into smart technologies that can help us make better decisions and reduce traffic congestion. We should focus on low-carbon solutions like ridesharing and e-biking – as well as remote working.”

Smart mobility
While autonomous and connected vehicles could enable more efficient use of network capacity, Tekir believes they will be slow to arrive in Istanbul due to a political conservatism which hesitates to embrace new technologies. “It is critical to apply disruptive changes if you want to create smart and liveable cities,” she argues. “Political and regulatory decisions have been made very slowly because, culturally, government structures are hierarchical and based on respect for senior executives. Collective decision-making mechanisms do not function effectively and well-educated younger staff are unable to influence policy.”

One example is the reluctance of authorities to provide access to open data. “Istanbul is a megacity competing with London, Paris and New York. The start-up entrepreneurs and universities want real-time data to provide better solutions. There are lots of discussions about privacy and security and lots of blurred definitions and explanations about sharing or selling the data. We are a young, educated population and open data is critical to creating fast, dynamic, vibrant cities,” says Tekir.

One motorcycle ridesharing app that grabbed headlines in 2017 was Scotty, which, by the end of the year, had over 2,000 registered drivers – all of whom had had at least five years of riding experience and passed psychological testing – and had logged over 200,000 rides. Based on an Uber-like app with a Beam Me Up! button, Scotty is named after the Star Trek character in reference to the idea that, while a normal taxi doesn’t solve the problem of being stuck in gridlocked traffic, motorcycles can weave in and out of queued vehicles, so enabling users to ‘beam up’ out of congestion-related delays. 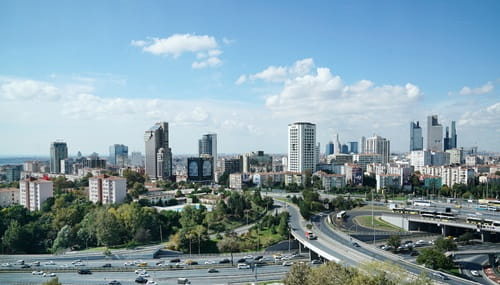 “We can start with point-to-points, over bottlenecks like the Bosphorus,” says Zosel,
“and short distances in urban space, jumping from skyscraper to skyscraper. Building a bridge takes years, but our system can start immediately. It’s infrastructure on demand.” In contrast to monolithic infrastructure projects requiring huge spending and land acquisition, eVTOL operations would make limited demands on urban space, since take-off is vertical from ports or hubs.

“Hubs are like stations with a lot of Volocopters going in and out,” Zosel explains. “Ports are at the hotel or on the balcony of a skyscraper.” Mobileinfrastructure promises improved flexibility since it can be redeployed across a city to assuage localized spikes in ground-level congestion. In contrast to pathway-based road and rail transit, air mobility has the added advantage of being node-based.

Ingredients for success
To guarantee safety, while bringing the network efficiency required to cost-effectively compete with other modes, lower airspace air traffic control will be needed. Uber claims eVTOLs will make up to 60 trips per day, carrying 3.5 persons on average, making it as productive as 20 cars.

“If you have hundreds flying you have to optimize landing slots,” says Zosel. “When you order your trip, the system determines where and at which moment you land, calculating wind and everything. You can imagine hubs where every five seconds aircraft go in and out. Like with bees in a hive.”

Some may have doubts about the prospect of Istanbul’s skies waxing thick with clouds of eVTOLs, while others point out the security concerns implicit in flying large numbers of private aircraft over a strategically sensitive international sea channel. What seems certain is that the multitudinous human tide will continue its daily ebb and flow across this waterway that is a crossing between continents and also between the past and future, with grand infrastructure projects and rapidly evolving technologies both playing a part.

Bosphorus Bridge
The first structure to span the strait when it opened in 1973, this 1,560m (5,120ft) suspension bridge became the 15 July Martyrs’ Bridge in 2016, in memory of those who fought to retake it during a failed coup d’état. It features RFID tolling and reversible lanes.

Great Istanbul Tunnel
First announced in 2015, this proposed megaproject involves a triple-tiered four-mile tunnel with two levels for road and one for rail traffic, connecting Istanbul’s two existing airports with a new airport which promises to be the largest on Earth. The tunnel is expected to cost US$3.5bn and will be financed on a build-operate-transfer basis, with completion scheduled for 2020.

Fatih Sultan Mehmet Bridge
Named after the 15th century Ottoman Sultan, this 4,954ft suspension bridge opened in 1988. It also features reversible lanes and is tolled in one direction, from Europe to Asia.

Yavuz Sultan Selim Bridge
The Third Bosphorus Bridge opened in 2016, and is the world’s second-highest bridge at 1,089ft, after France’s Millau Viaduct. It has a main span of 4,619ft (1,408m) and is one of the world’s widest suspension bridges at 192ft (58m). It will form part of the Northern Marmara Motorway, allowing east-west through traffic to bypass Istanbul city entirely.

Marmaray
This is a rail tunnel which partially opened in 2013, when President Erdogan drove the first train to pass through. The project comprises a 8.4-mile (13.6km) tunnel upgrade with 39 miles (63km) of connecting suburban rail lines. Full opening was delayed by discovery of the remains of the 4th century Byzantine Harbour of Theodosius during excavation.

Words by Jack Roper and originally published in Intertraffic World 2019