EV charging for all

Encouraging EV adoption is a cornerstone of government plans to decarbonize, but such vehicles are only really feasible for those with driveways or access to limited public charge-points. But now, London’s Lambeth Council is building a blueprint for extending the electric revolution to underserved communities in London and beyond.

For countries worldwide to achieve carbon-neutral transport targets in the teeth of mounting climate turmoil, popular adoption of electric vehicles (EVs) will be imperative. That will depend on national charging infrastructures which are universally accessible, regardless of location or social context. Crucially, EV ownership must be rendered viable for dwellers in high-rise blocks or urban estates without off-street parking or access to overnight charging.

By 2030, UK government hopes to see 14 million EVs on British roads. But 40% of UK households today have no garage or driveway and for every public-access on-street charger nationally, there are 34 EVs on the road. Consequently, these households own just 20% of Britain’s EVs, despite often living in urban communities whose disproportionate exposure to toxic exhaust fumes means they have most to gain from EV uptake.

“Unfortunately, a classic chicken-and-egg scenario is failing communities,” says Connected Kerb CEO, Chris Pateman-Jones. “Charge-point operators won’t build public infrastructure unless they see high EV adoption. But without reliable charging, why would anyone go electric?” It falls to proactive local and city councils to break this retrograde circle. In London, Lambeth Council has enlisted the services of Connected Kerb to install curbside chargers in areas of most need.

In 2018, Lambeth became the first London borough to declare a climate emergency and aims to reach net-zero carbon emissions across its estate, services and operations by 2030. Today, traffic causes 50% of its air pollution. Since about one-third of residents live on council-managed estates and less than half have off-road parking, a preponderant portion of Lambeth’s potential EV-driving populace would be entirely reliant on public charging infrastructure.

Connected Kerb will install 22 on-street chargers across 11 council estates in Lambeth, two at each location. The units combine a power and data pack in a protective steel box beneath the pavement with a visible, above-ground socket. The subterranean componentry will enable an array of hardware and software applications. The socket provides a 7kW fast-charge tailored to habitual charging at predictable daily times. Contactless payment via the Connected Kerb app based on a consistent tariff across sites will support fair and equitable access.

Connected Kerb’s aspirations to democratize charge-point access dovetail with the ‘levelling-up’ agenda professed by UK government. “For those in society unable to park and charge at home, EVs remain an unattractive option,” says Pateman-Jones. “Failure to serve those communities risks creating a two-tier scenario where EVs are primarily adopted by the wealthy.” Nationally, Connected Kerb expects to install 30,000 on-street chargers in 2022 and 190,000 by 2030. “It’s critical to win the hearts and minds of all transport users,” he continues. “We’re pledging to educate every community in the UK on the benefits of EVs.” 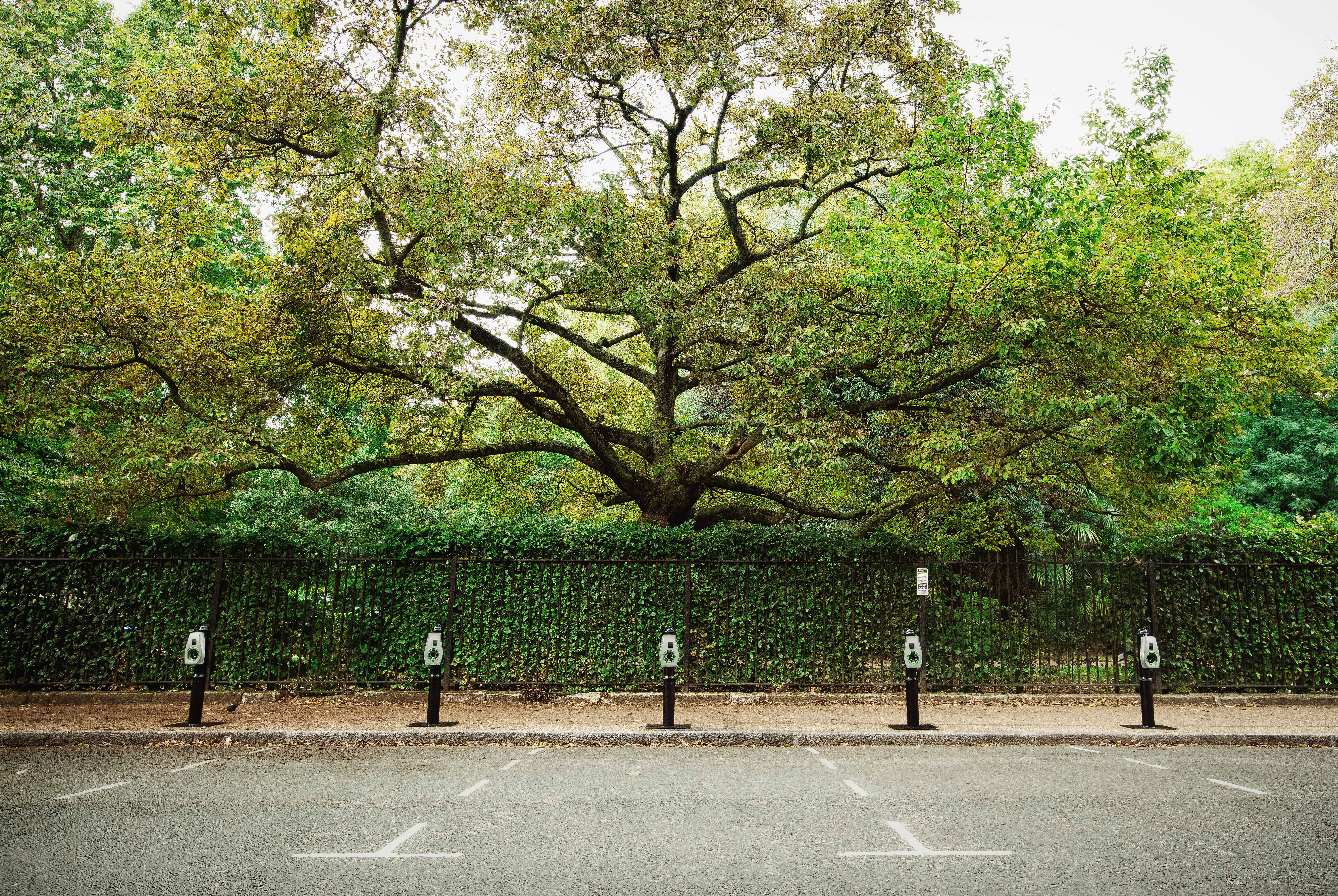 Lambeth Council’s strategy is motivated by its early commitment to carbon-neutrality and the introduction of London’s Ultra Low Emission Zone (ULEZ). The current scheme is supported by 75% funding from the UK Office for Zero Emission Vehicles. “On highways, priority is driven by demand,” explains Lambeth Council’s Lawrence Conway. “On estates, we have initially chosen larger estates in both the north and south of the Borough.”

“Going forward, we will look to provide chargers to estates of over 100 properties where we have a specific request,” he continues. Site surveys will determine the availability of adequate electrical capacity before the initial locations are confirmed. “Our ultimate strategy is to spread chargers as widely as possible and provide them within a five-minute walk of anywhere with no off-street parking.” Lambeth Council aims to install 200 chargers by 2022.

The British government has committed to phase out new petrol and diesel car sales by 2030, by which time it expects the national EV fleet to grow to 14 million. Correspondingly, it predicts a need for 2.8 million public charge-points nationwide and has recently announced proposals for a robust and expansive charging network. Considering the UK has just 30,000 public charge-points today, it is an enormous task. But councils are uniquely placed to support the transition which Connected Kerb’s business-model is designed to enable.

“Our partnership with Lambeth Council is a prime example of how affordable and accessible charge-points can kick-start the EV revolution in council-owned housing estates,” says Pateman-Jones. “Our sustainable, long-life, easy-to-deploy on-street infrastructure allows us to reach communities others cannot.”

Other solutions typically last for five to seven years, but Connected Kerb reckons its system to offer a 25-year lifespan. “It becomes an infrastructure proposition as opposed to a product sale,” says Pateman-Jones. “Because we earn our money back over a longer period of time, we can reduce the cost of charging to consumers.”Connected Kerb sees Lambeth as a blueprint for public EV infrastructure roll-out elsewhere. From East Sussex to Northumberland, it is already implementing its technology in council-led projects across the country. “In Kent, we’re installing chargers for non-urban parish councils,” says Pateman-Jones. “We can bring vital infrastructure to communities which would otherwise be left behind due to low footfall and limited grid coverage.”

“The time for pledges is over,” he concludes. “We need every road user to fight the climate change battle together, in every corner of the globe. That’s why we are focused on deploying EV infrastructure that makes charging sustainable, affordable and inclusive. By working with councils, we can help them meet air quality and emissions targets, deliver infrastructure and ultimately enable the UK to reach net-zero.”

‘A chicken-and-egg scenario is failing communities. Operators won’t build infrastructure unless they see adoption. But without infrastructure, why would anyone go electric?’

2.8 million
The number of public charge-points Britain may need by 2035

30,000
The number of public charge-points in Britain today

190,000
The number of public charge-points Connected Kerb expects to install by 2030 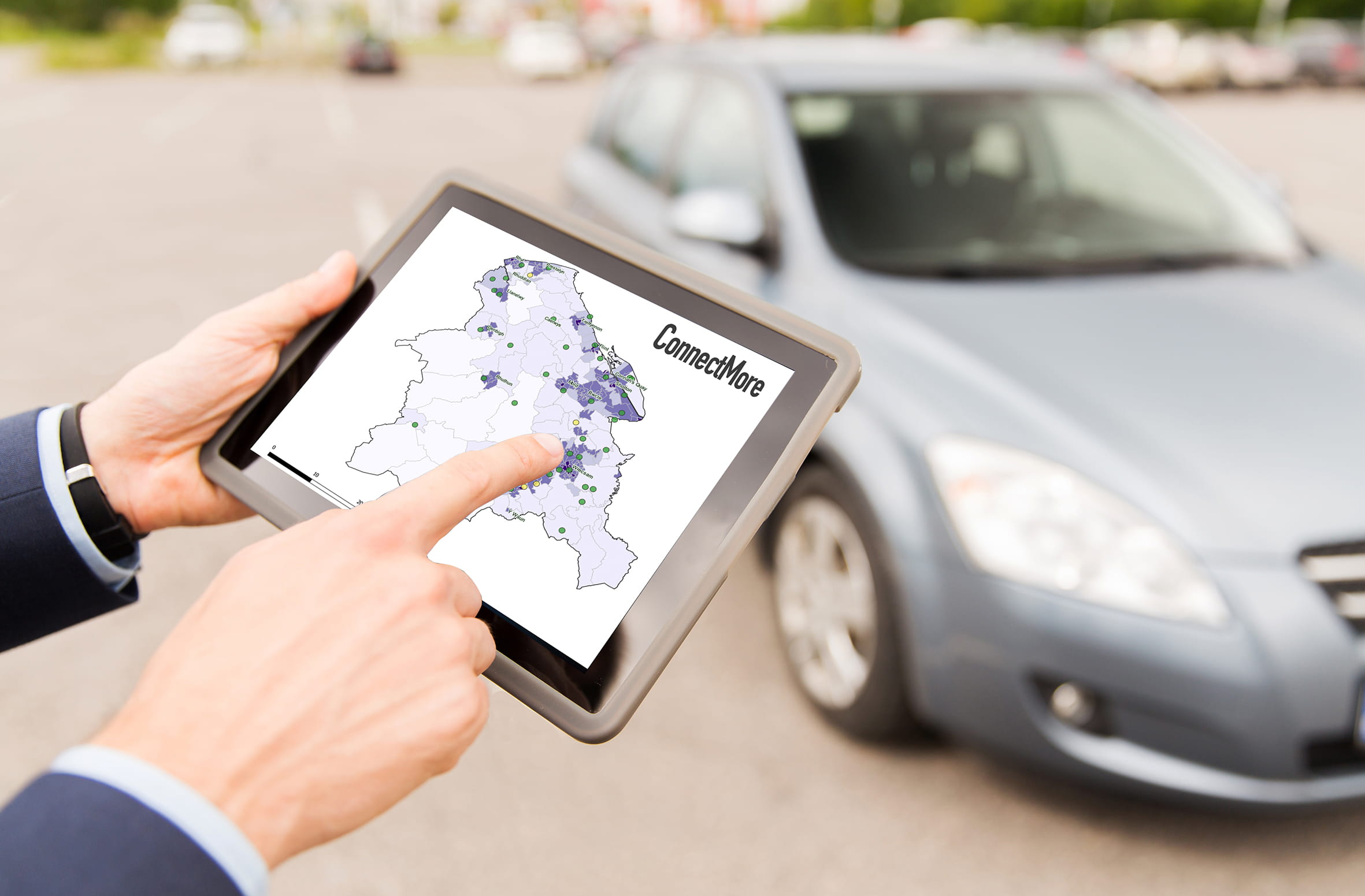 Its ConnectMore Interactive Map (CIM) is a free-to-use tool accessible via the SP Energy Networks website. It enables local councils, property developers and charge-point operators to identify areas of high public demand and see where the electricity grid can most readily accommodate charging infrastructure. It establishes available capacity in minutes, whereas correspondence with distribution network operators can take days or weeks.

Evidence For The Charge

“The CIM allows installers to prioritize locations where existing network connection is plausible,” says SP Energy Networks Charge Project lead, Geoff Murphy. “In the past, both local authorities and businesses were put off investing in EV charging because establishing expected demand and installation feasibility was complex and time-consuming. The CIM could change that forever, quickly delivering the hard evidence needed to get charge projects off the ground.”

The CIM includes a predictive transport model based on PTV Group’s Visum software. This uses four potential EV uptake and charge-point roll-out scenarios and displays demand data for each in five-year increments from 2025 to 2050. It also shows where residential driveways will enable home-charging. The electricity network model, provided by EA Technology, will be updated every three to six months.

‘Transport models are typically updated after a shelf-life of about three years,’ Murphy continues. ‘Plans to update or extend the CIM will depend on its utilization and value to stakeholders. But potentially, it’s a game-changer for public charge-point installation.’

‘In the past, establishing expected demand and installation feasibility was complex and time-consuming.’

Electromobility: a case of when, not if