With the world striving to reduce its carbon footprint, we are seeing increasing pressures on resources. With the current debate on the EU Commission's proposal to legislate some types of energy as green to decarbonize our nation's, finding more sustainable alternative solutions becomes a serious possibility. Energy sources and power grids are currently under immense pressure to cater to the growing demand from businesses and consumers. Whether it’s from the increase of EV drivers or the growing population needing more power, ensuring the infrastructure is in place to fulfil emissions goals is not going to be an easy task. Michael Colijn, CEO of Heliox, elaborates.

As an example in the UK alone at least 60,000 charging points are needed to be installed to power 11.3m electric vehicles, and with EVs set to outsell diesel and mild diesel vehicles by 2023, the strain on power grids is sure to be felt. Northern and Southern regions of the EU are charging forward to become leaders in the EV market, the gravity of the issue at hand.

"In the UK alone, at least 60,000 charging points are needed to be installed to power 11.3m electric vehicles, and with EVs set to outsell diesel and mild diesel vehicles by 2023"

But what if our grids didn’t have to struggle? What if city planners, bus operators and even consumers themselves had the chance to manage their own grid reliance and even make money in doing so?

Smart energy management serves as the perfect solution to this problem, and will become revolutionary in supporting the growing adoption of EVs. In order to manage one’s energy, charging can be activated at times when it least impacts the grid while also costing less. Smart energy software also allows for energy stored in EV batteries to support the grid where it's needed most, turning EVs into distributed energy resources.

As such, the key to unlocking the future of mobility and syncing with ambitious net-zero emissions goals is in smart energy management.

Charging at the right time, in the right location

To support the UK’s plan to phase out all new non-zero emission road vehicles, an additional 3m charging points will be needed across the nation in 2040. For city planners and fleet managers of EU nations, this will mean cooperation in balancing the demands of the grid to ensure energy and power are fairly distributed across each country.
Let’s not forget the role that EVs have in the bigger picture of achieving Net Zero emissions. Commercial EVs such as buses and trucks now go beyond simply being a mode of transport, as they too can contribute in their role as energy-storage assets. By definition, with the right energy management infrastructure in place, EV owners will have the option to sell stored excess energy back to the grid when the demand for energy is peaking. For example, on a windy winter night, there would be too much renewable energy on the system due to wind farms producing too much power. On the opposite end of the spectrum, we know how easy it is to power up electric car chargers that can be switched on to charge during these periods of excess renewable power production. Companies such as Nissan are not only offering this smart energy management service to EV drivers but are defying the constraints of renewable energy as it allows EV’s to withstand energy shortages.

Commercial EVs such as buses and trucks now go beyond simply being a mode of transport, as they too can contribute in their role as energy-storage assets"

However, in order to make this a reality, we need to see a coalition of energy providers, local governments and public transport companies. Meeting the challenge of demand on the grid is still something most nations will struggle with unless there is smart energy management.

The grid’s growing demand calls for smart energy management
As it stands the UK’s national grid is struggling to balance this demand. Electrifying the aforementioned 11.3m vehicles is only one facet of energy output as there are still households, villages and cities that too need electrification. We see the same activity across the EU, with national capitals such as Paris electrifying 90% of their municipal fleet this year and Norway due to hit 100% EV sales early next year.

To effectively manage this demand, city planners need to develop a smarter way to hit goals and prevent shortages. This will require a greater charging infrastructure presence. But, not only that, - “smart” technologies need to be developed to facilitate the deployment of such charging systems. For example, Vehicle-to-grid (V2G) technology, an advanced form of smart charging technology, is considered a practical solution to energy management as it will support EVs that effectively put energy back into the grid. Octopus Energy’s partnership with Nissan perfectly demonstrates this in practice: the energy provider allows Nissan Leaf drivers to charge and sell excess energy during optimum hours - charging in the off-peak and selling in the peak. Energy management of this level will enable the next generation of decentralised energy, improving balance across the grid and presenting further incentives to potential EV owners. However for large scale deployment, a solid infrastructure base is needed.

In some areas, the grid is not strong enough to support additional demand from chargers. This is the case, for example, on industrial sites in remote areas or in city centers. Where the infrastructure cannot be economically upgraded, battery energy storage systems can be used to supplement the power needed to charge. Battery storage is also part of the equation when there is a mismatch between the times that the vehicles are plugged in, and the times where low-carbon, low-cost energy is produced, which is why BESS is often deployed together with solar power. Smart energy management and V2G are the first steps to a decentralised, low-carbon energy and transportation future, with BESS adding further momentum to the transition.
While this is a waiting game, we are running out of time. The future is here and if city planners want to unlock the future of mobility, they need to invest in charging infrastructures for all electric vehicles that can not only support the grid but help it to thrive as we move towards a decentralised energy system.

"While this is a waiting game, we are running out of time. The future is here and if city planners want to unlock the future of mobility, they need to invest in charging infrastructures for all electric vehicles"

Another way to do this is to heighten the presence of Direct Current (DC) charging. Although Alternative Charging (AC) leads the market with its affordability, DC efficiently facilitates the use of renewable energy sources such as solar and wind, preventing energy loss. With EU nations striving to stray away from fossil fuels, the inclusion of renewable energy as a part of city planners’ grid management schemes will foster the development of smart cities.
And though DC charging can use higher power, potentially straining the grid, it charges EVs at speedy rates at home as there is no need to convert AC into DC. Every EV is equipped with an AC/DC converter, which requires more energy but as cities get smarter we will see a decrease in converting stations. This will give consumers the convenience they usually have with high-emitting vehicles, thus removing the additional energy needs of the converter. That being said, this can only happen with on-the-road DC charging stations becoming more prevalent and V2G technology (for overnight charging) implemented to balance the demand on the grid.
Once this has happened, potential EV customers will no longer need to worry about range anxiety, as a fast charging station’s presence will help them feel at ease. overcoming one of the biggest barriers to EV purchasing and increasing energy resilience. 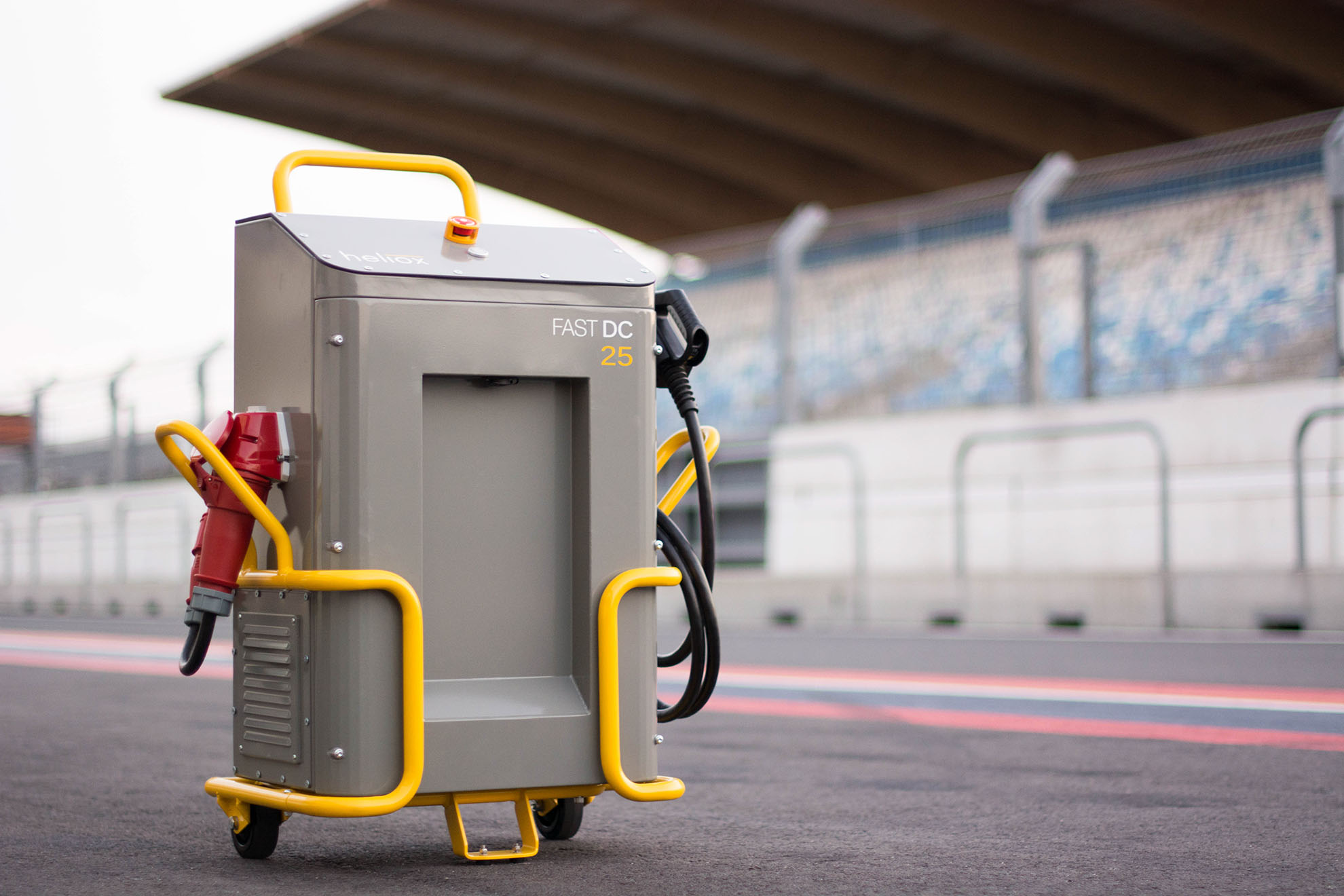 The need for a reliable electric ecosystem is something felt across the UK and EU nations. A decentralised energy system is what’s needed. This is where energy is generated in close proximity to its use, diminishing the need for large industrial plants connected through national grids. But we are yet to see this change and its effects are salient. Germany hasn’t seen any reduction in transport emissions since 1990 and in France, where emissions account for 31% of GHG emissions, the numbers have been increasing rather than dropping. This concern comes from a lack of investment in the public transport sector because of the worry that their own grid can't sustain electrifying activities. Though nations such as Germany have already electrified 61% of their train network, we won’t see ambitious COP26 goals met unless there is intervention from city planners and local governments. We know that political leaders used COP26 as a moment to announce grandiose plans in inspiring fashion but to achieve these ambitions we must ensure they are accountable for the management of our existing resources.
Energy storage can be that linchpin to energy management. Energy insecurity is a huge issue governments must deal with too, hence a decentralised energy system where renewable energy can be stored in multiple locations, off the grid and closer to homes, will mitigate such energy disruptions. Fuel poverty, transmission losses and carbon emissions can all be reduced giving governing bodies the chance to meet their COP26 goals whilst reducing the pressure of the grid.
Smart energy management can be the ultimate tool to combat climate change. Its effects will especially be felt in the automotive industry as fleet managers and consumers electrify their modes of transportation. Dramatically lowering the cost of EV ownership through the potential revenue streams and increased charging speed will move mountains for nations seeking to reduce the transport GHG emissions.

"Analysis from the EU Global Covenant of Mayors for Climate & Energy (GCoM) report shows that global GHG emissions equivalent to that produced by 16 billion cars have been reduced in cities, using a small amount of capital"

As members of the EV100 attempt to make electrified transport the norm by 2030, it will be necessary to consider smart technology. To achieve this goal we will undoubtedly see smart cities emerge, where smart energy management will be a prominent part of its blueprint. As cities account for 55% of Earth’s global population and they churn out about 75% of our GHG emissions, this move seems almost guaranteed. Analysis from the EU Global Covenant of Mayors for Climate & Energy (GCoM) report shows that global GHG emissions equivalent to that produced by 16 billion cars have been reduced in cities, using a small amount of capital. But, greater funding is needed and it's simple. There are plans already in place and with action will come the ability to increase energy resilience and better balance grid demands.

Right now maximising the finite resources we have is the key to meeting COP26 goals and relieving stress from our power grids. The long term solution is to better manage our energy smartly, and whether it’s V2G, Storage or DC, the answer is in sustainable management.

EV Charging for all

Smart infrastructure: charging on the move