One of the promises of connected vehicle data is that it could do away with the need for any other type of road sensor. That dream has not yet been realised, but US researcher Hesham A Rakha has been investigating machine learning algorithms that could one day help to do just that.

Knowing how many cars are on a given part of the road is critical for traffic management, especially at intersections with traffic lights, where estimates of traffic density are used as inputs for the timing of traffic signals. In theory, when every vehicle is a smart vehicle, able to communicate with infrastructure, estimating traffic density will be far easier and more accurate. It will also be cheaper, as modellers will no longer have to rely on expensive embedded loop or other stationary sensors to capture vehicle data.

With this future scenario in mind, a team from the Urban Mobility & Equity Center – a federally funded research consortium in the USA, led by Morgan State University, with support from the University of Maryland and Virginia Tech – has investigated and tested several approaches to estimating traffic stream density on roads with traffic signals using data from connected vehicles, in downtown Blacksburg, Virginia, USA.

The new CV data models have been tested in the real world by looking at traffic on streets in downtown Blacksburg, Virginia, USA

The findings have been published in a report, entitled, Estimating Traffic Stream Density Using Connected Vehicle Data. The report found that the most accurate estimates resulted from using a linear Kalman filter – a type of algorithm.

The research also involved determining the level of market penetration of connected vehicles, which the researchers did by developing a machine-learning model. As that level increases, so too will the accuracy of the estimates, the report found. Intertraffic World spoke to Hesham A Rakha, the principal investigator on the research project, which was completed in April 2021, to discover more.

What is the problem you are trying to solve?

Traffic stream density is a critical input to various advanced traffic management systems. However, measuring traffic density in the field is difficult since it is categorized as a spatial measurement. In our work, several estimation approaches are developed to provide real-time estimates of the traffic stream density on signalised approaches using connected vehicle (CV) data. The estimates are then input to adaptive traffic signal controllers to improve intersection performance, namely its efficiency, mobility, and environmental impacts.

Past research has used different data sources, such as stationary sensors (e.g. loop detectors) or fused data (combining two different sources of data) to estimate the traffic stream density along traffic roadways. However, stationary sensors suffer from poor detection accuracy and have high installation and maintenance costs. The fusion of data from multiple sources requires considerable resources and suffers from the same drawbacks as stationary data.

How is your approach different to previous attempts to solve this problem?

Real-time traffic estimation has received increased attention following the introduction of advanced technologies, such as CV technology. In our work, we attempt to develop novel estimation approaches using only inputs from CVs. Our new research approach is unique as we are attempting to reduce the cost of data collection through the elimination of, or reduction of, stationary sensors.

The idea was introduced to improve the research area of real-time traffic density estimation. The new improvements include avoiding data quality issues produced by current sensors, such as detection failures, and reducing sensor installation and maintenance costs.

How can connected vehicles help?

CVs are defined as vehicles that can exchange information, such as instantaneous speed, position, and acceleration, with other CVs. This is generally referred to as vehicle-to-vehicle, or V2V, communication. These CVs can also exchange information with road infrastructure, which is referred to as vehicle-to-infrastructure, or V2I, communication. Comparing our new approach to state-of-the-art approaches, the use of CV data allows us to track all CVs in real-time, while for state-of-the-art approaches the system accesses vehicles’ information at fixed locations (around the sensors’ locations). Consequently, our new system will have more information about traffic behaviour at any time and is also cheaper given that vehicle connectivity is the new norm of the future.

Can you summarize your major findings?

The report develops a linear Kalman filter (KF), a linear adaptive KF (AKF), and a nonlinear particle filter (PF) to estimate the traffic stream density using CV data only. The proposed approaches were evaluated using empirical and simulated data, the former of which were collected along a signalised approach in downtown Blacksburg, Virginia.

Results indicate that density estimates produced by the linear KF approach are the most accurate and robust. A sensitivity of the estimation approaches to various factors, including the level of market penetration (LMP) rate of CVs, the initial conditions, the number of particles in the PF approach, traffic demand levels, traffic signal control methods, and vehicle length, were presented.

Does increased penetration of CVs automatically give greater data accuracy? The higher the density of traffic, the more CVs are likely to be present

The report also investigated the sensitivity of the KF estimation approach to vehicle length, demonstrating that the presence of longer vehicles (trucks, for example) on the approach reduces the estimation accuracy. In conclusion, the use of the linear KF approach is highly recommended in the application of traffic density estimation due to its simplicity and applicability in the field. 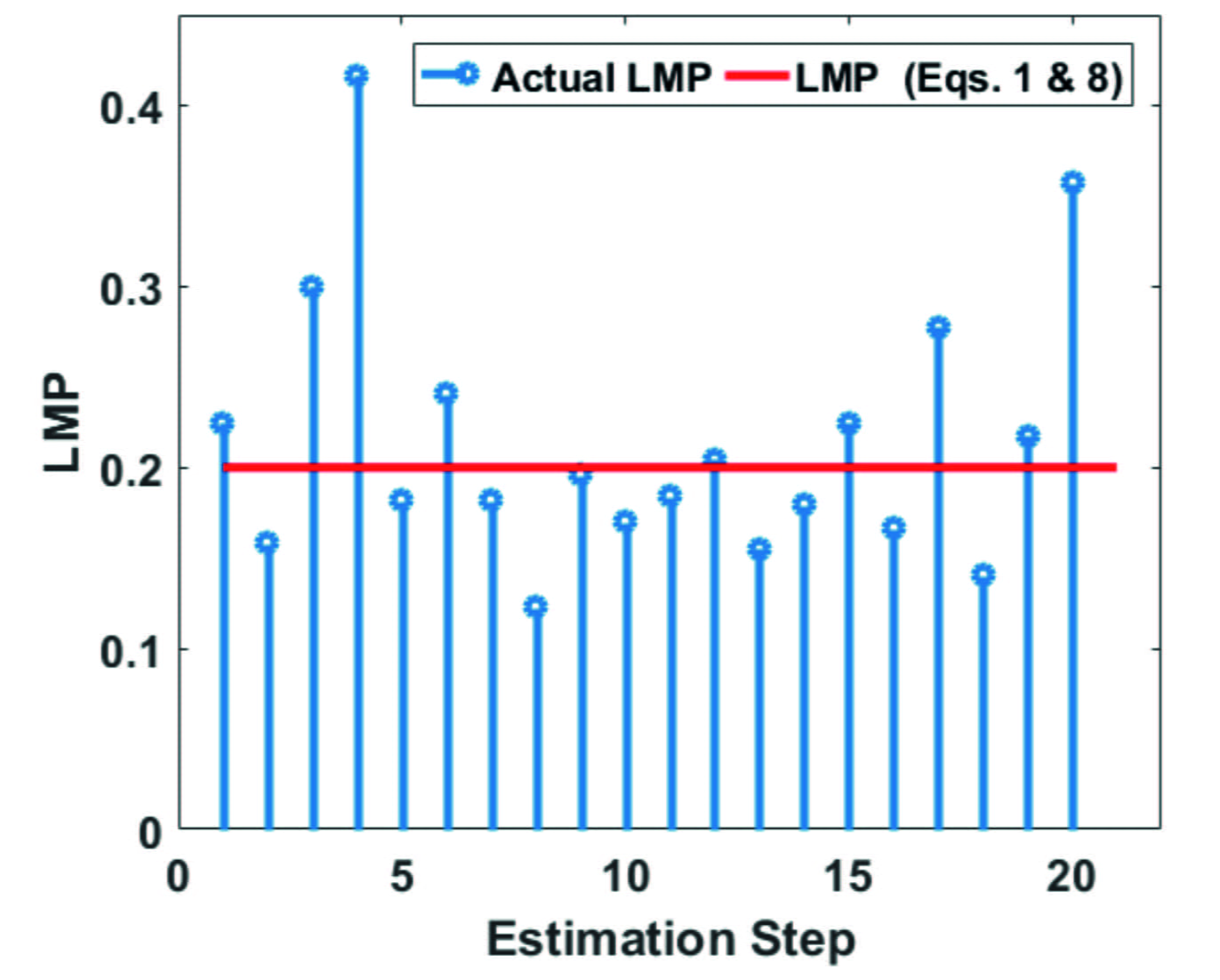 How will machine learning help to further improve the model?

In our developed KF, the state and measurement equations use one LMP (ρ) value for the entire simulation for each LMP scenario. This means that we ignore the instantaneous changes that occur in real scenarios. Instead, we use the average ρ value in our equations. Figure 1 demonstrates how the actual ρ values are changed in every step. However, our model was designed to use the average ρ value along the estimation steps.

The AKFNN machine-learning model was developed to use real-time ρ values to reflect all instantaneous changes. Specifically, a machine learning (ML) model was developed to provide real-time estimates for the ρ values so the AKF model can use these estimates in every estimation step. The use of ML improved the traffic density estimation as the errors produced from the state equation were reduced due to the use of actual ρ values instead of using an average ρ value. Consequently, it is much easier for the AKF to correct a small error rather than a large error after applying the measurement equation.

Just how much do you expect the new method to improve traffic density measurement?

Our approach relies on using only CV data without the need to install new sensors in the field, which makes our approach’s implementation cost lower compared to state-of-the-art approaches. Data can be gathered directly by the controller using the vehicle-to-infrastructure (V2I) communication.

We now plan to test the traffic signal controller performance using the estimation outcomes from our KF estimation approach.