By 2050, almost 70% of the people are projected to live in urban areas. In most modern cities, the space is designed to allow fast traffic flow, especially aimed at the car. A large part of the public space is occupied by roads that have to take you quickly from A to B. Unfortunately, people lose a lot of time in city traffic jams. The role of cities is admittedly decisive in a paradigm shift, since urban areas are responsible for 70% of emissions. With our cities expected to grow, some experts agree that new urban planning is necessary in order to improve quality of life and save the environment.

Since the outbreak of COVID and even before cities like Copenhagen and Paris have been introducing new urban models. From car-free cities, to superblocks, the compact city to the 15-minute city. All models seem to have the same goal: prioritise walking and cycling to make cities and its citizens healthier.

In car-free cities governments aim to reduce the use of privately owned motorized vehicles and motivate people to use active and public transportation facilitating easy access. By reducing air pollution and increasing physical movement, the city of Hamburg plans to be car-free by 2034.

A superblock is similar to a low traffic neighbourhood. In certain blocks motorized traffic is banned and more space is provided for active travel, people and green space. In Barcelona the government plans to create 500+ superblocks which is estimated to prevent 700 premature deaths yearly in the city.

A 15 minute city is a city that requires minimal travel among houses, parks, office, restaurants, schools. Every essential amenity is within a 15 minute walk or cycle. Regardless of whether you live in the centre or in another neighbourhood, each neighbourhood fulfils six social functions: living, working, supplying, caring, learning and enjoying. Essential facilities include: 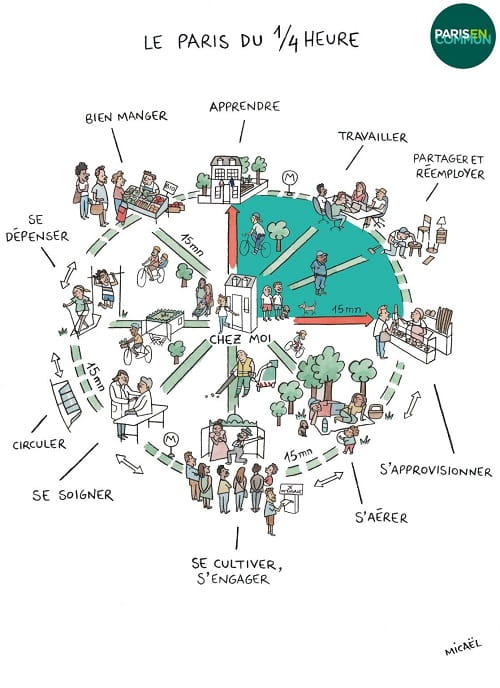 A driving force behind the 15-minute city is Carlos Moreno, scientist at Sorbonne Business School and an expert in urban planning. He wants to achieve two things: the quality of life in the city must be improved and at the same time the burden on the environment must be reduced. In the 15 minute city that Moreno envisions, people spend less time and energy traveling. There is more time and space for meeting people. In addition, there is little car traffic, resulting in less emissions. In order to offer this quality of life, according to Carlos Moreno a 15-minute city consists of four main principles: density, proximity, diversity and ubiquity. These components go across the six essential social urban functions mentioned above.

In a conventional way of planning density is meant as high density buildings, but in a 15-minute city it is related to the number of people per square kilometre. An optimal density helps to effectively plan available urban space and make sure essentials are available without needing to use automobiles.

The dimension of diversity is twofold: (i) the need for mixed use neighbourhoods which are primary in providing a healthy mix of residential, commercial and entertainment components and (ii) diversity in culture and people.

This dimension is helping cities reduce the amount of time lost in commuting and in reducing the environmental and economic impacts. Additionally it helps in determining social indicators impacting urban residents.

The neighbourhoods must be available and affordable to anyone.

Moreno also mentions three characteristics of a 15 minute city: The city's rhythm is tailored to people - not cars. Every square meter of available space is used in multiple ways. Neighbourhoods are designed so that you can live, work and receive your daily amenities - without being constantly on the road.

“Don’t get me wrong, I am not angling for cities to become rural hamlets. Urban live is vibrant an creative. Cities are places of economic dynamism and innovation, but we need to make urban life more pleasant.”

Cities that want to become a 15 minute city do not have to transform in one fell swoop. The concept is by definition suitable for implementation at neighbourhood or district level. This makes a gradual redevelopment of the city possible. Cities can apply the ideas behind the 15 minute city in existing plans for new construction and redevelopment in city districts. Examples of cities that are now implementing this are Paris, Barcelona, Melbourne, Ottawa, New York and Copenhagen.

Carlos Moreno says that in Paris, 66% of the public space is streets for cars. But individual cars move only 17% of the population. The Mayor of Paris Anne Hidalgo’s goal has been to improve the quality of life since her appointment in 2014. She previously banned car traffic along parts of the Seine and in February 2020, she announced that she wants to turn Paris - a city of 2.2 million inhabitants - into a ville du quart d’heure, a 15-minute city and even appointed a commissioner for the 15-minute city.

In Barcelona 60% of the public space is used to accommodate cars. However, only one out of every four trips is made by car. According to Deputy Mayor Janet Sanz, in a recent local government survey, 90 % of the population favours public space measures for pedestrians, bicycles, and public transport use. Thus it aims to allocate the space for healthier purposes. Barcelona is in many ways a 15-minute city applying superblocks successfully. 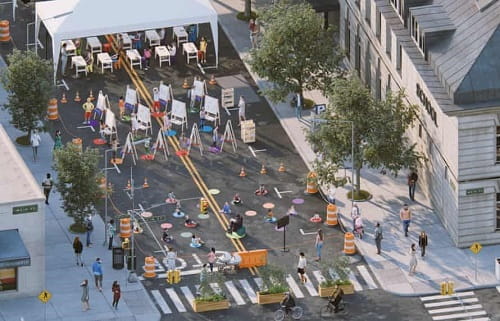 Photo: A visualisation of how a socially distanced school street might work.Photograph: Nacto/Bloomberg Associates

Former transport Commissioner Janette Sadik-Kahn finds the next step for New York is to reclaim the streets in using them as open-air classrooms, poll-centres and any outdoor activity. The roads should be as adaptable as the city itself. “At the New York City department of transportation, where I served under mayor Mike Bloomberg, we viewed the city’s 9.656 km of streets as critical assets that could be used for more than just moving and parking cars. In less than seven years, we created 644 km of bike paths, seven rapid bus routes, and launched 70 plazas citywide, reclaiming 73 hectares of former street space.”

The city of Ottawa launched a 25-year growth blueprint in 2019 to create 15-minute neighbourhoods. It learns from cities like Copenhagen, Amsterdam and Portland. It aims to have residents make significantly more than 50% of their trips by foot, bicycle, public transit or by carpooling. Currently, 40 -50% of its residents' daily trips are made by a mode of transportation other than their personal vehicles.

Copenhagen pedestrianised its main shopping street in 1962. The district of Nordhavn has been designed as a 5-minute district. The next 50 years the district will be extended to be offering 40,000 inhabitants 40,000 workplaces. Shops, institutions, work places, cultural facilities, public transport: all within 5 minutes’ walk from any point in the district. The area will be serviced by an elevated metro track and a bicycle network which create a green artery. The elevated track functions as a cover for the bicycle motorway, so that cyclists will be able to stay dry in all weather conditions.

In 2018 Melbourne presented the 20-minute neighbourhood pilot programme. The 20-minute neighbourhood is about living locally and increasing the quality of life. Melbourne chose the 20-minute distance because research showed this is the maximum time people are willing to walk to access daily needs locally. This represents 8,000 meter walk from home to a destination and back. Several pilot projects were delivered in 2018 in three areas with reports and recommendations to view here. 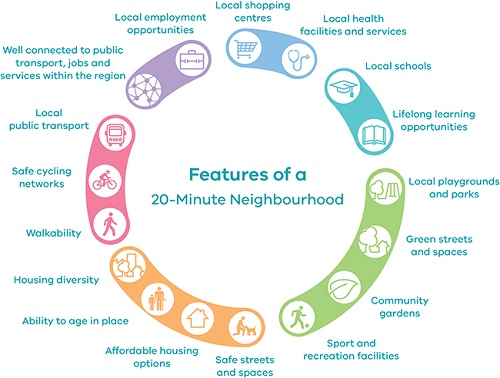 A new urban planning model which can change a capital and the goal is to reduce replacements. Sounds familiar and very recent, right? Staying in your own area is something we have been doing since lockdowns, haven’t we? Carlos Moreno : “COVID-19 has accelerated the introduction of the 15-minute city in many cities, thanks to the rediscovery of proximity, the use of active mobility and the strengthening of social ties.” To be confined to only a 1 km radius to your home can be refreshing. You get to know your neighbourhood and buy from local shopkeepers, craftsmen and entrepreneurs. This increases our social contact and we meet new people.

In a lot of cities cycling and walking was promoted and even new bikelanes were created. In European cities bicycle levels increased by 30%, in New York by 67% and in Beijing by 150%. C40 mayors have integrated the 15-minute city in the common agenda to recover from the crisis and make an ecological change.

The four dimensions of density, proximity, ubiquity and diversity were modified to density, proximity, diversity and digitalisation after observing the challenges that different cities across the globe endured during the height of widespread cases of COVID-19 and the subsequent health measures and protocols that ensued aimed at mitigating the spread.

This added dimension is very relevant to the modified 15-Minute City concept. Digitalisation, especially during this period of COVID-19, has made it possible for people to work from home and communicate virtually. Digital solutions ensure the actualisation of the three dimensions above. Digital tools offer different forms of modality, such as bike sharing, online payments, blockchain technology and measuring emissions and monitoring traffic flows. 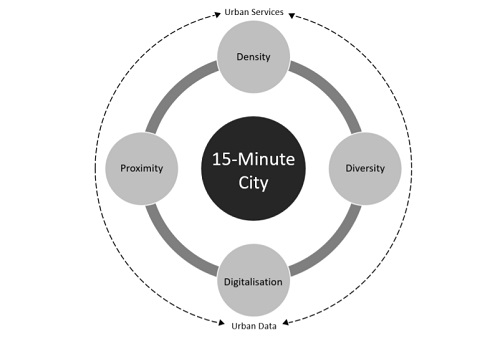 “There will also be mobility around homes that was not available before and it is perhaps there that the so-called 15 Minute City will take off.”

Transdev’s Aurelien Cottet explains: “Looking to the future, the real question is will working from home become a permanent fixture and if so, how many days per week? This change of working scenario will have a significant impact on all transport networks where they will be less congested and users will ask for an offer on 2-3 days a week instead of monthly or annual pass. There will also be mobility around homes that was not available before and it is perhaps there that the so-called 15 Minute City will take off. It is also very likely that there will be some exodus from the city centres for families who will eventually seek more greenery and space and take advantage of teleworking days. MaaS will have shown up a lack of complementary first and last mile type solutions essential to public transport in remote suburbs – MaaS will be seen as a solution for the lack of supply in rural areas.”