Just how “smart” can road infrastructure become? Quite a lot more, if two experts’ opinions are anything to go by. Intertraffic spoke to César Bartolomé, Director for Innovation at IECA (the Spanish Institute of Cement and its Applications) and Chair of the Smart Transport Alliance’s Smart Sustainability committee, and Ricardo Lobo, head of R&D at ALEATICA, one of the leading companies in the Latin American market for public private partnership projects in the Toll Roads, Railways, Airports and Ports sector, to find out more about in-motion electric vehicle charging.

Innovation is the name of the game. It always has been in any sector of traffic and transport technology, but over the past two years innovators have had something of a field day. Anyone who attended the ITS World Congress in Hamburg couldn’t fail to be impressed with just how much progress has been made in certain sectors of the industry – it wasn’t too long ago that the idea of an urban air logistics drone was considered “fanciful” and yet German firm VoloCopter were demonstrating exactly that.

But as far as road infrastructure goes, is there a limit? Infrastructure is infrastructure, right? Wrong. The technological revolution that is happening all around also includes giant leaps forward in the development of the simple, or not so simple, roadways.

“The technological revolution in terms of communication between vehicles and infrastructure will determine the future design of roads, which will necessarily have to adapt to the new reality,” says Bartolemé. “Electric vehicles, autonomous vehicles and cooperative driving have different infrastructure requirements that must be integrated for joint use.

“Cooperative driving requires the use of new technologies that must be housed within the infrastructure in an efficient and practical way so it is necessary to have a durable infrastructure that offers structural and long-term protection.”

One could argue that what we’re aiming for is the best of both worlds, where highly intelligent technology lives alongside, if not inside, traditional transport infrastructure.

“The infrastructure has to protect the technology that has a high added value and costs, while allowing access for repair and upgrade,” he concurs. “In this sense, pavement and safety barriers must function as service galleries where high-technology devices may be embedded. There is high divergence in the relative development velocities of technology and infrastructure, and it is necessary to combine and align both.”

The electric vehicle is changing the nature of our roads

One aspect of smart infrastructure innovation that has been gaining traction (almost literally) and garnering attention is the electrification of our roads and highways as an alternative to static EV charging solutions.

“Charging stations with fixed electrical outlets can charge batteries when electric vehicles are parked in public space but it is insufficient for regular unplanned trips or for vehicle fleet operators, such as taxis or buses,” Bartolomé explains. “These difficulties are exacerbated in the case of road transport vehicles, where stops have a direct impact on the service provided. It is also clear that both this type of vehicle and road freight vehicles cannot make stops beyond those established by regulations, and neither is it operationally desirable to wait long enough for the battery to be sufficiently charged.”

Step forward the concept of the electrified road. “The answer to these problems can be provided by eRoads, where the vehicles receive the necessary electric energy while driving without the need to stop,” he says. “The concept of dynamic charging is still in development, but some test sections have already been built with positive results.”

Siemens built the first section of “eHighway” in the US in 2014 and it comprised hybrid heavy vehicles combined with intelligent energy collectors powered by catenaries, a system of overhead wires used to supply electricity to trains, trams, light rail vehicles or, now, trucks, that are equipped with a pantograph.

“Although the results from subsequent tests in California and Sweden were largely positive, the system presented the disadvantages of catenary-based methods, such as visual intrusion, occupation of lateral space, gauge limitations in existing tunnels, possible acts of vandalism, protection against vehicle crashes, and so on,” Bartolomé adds.

Which is where wireless, in-motion charging systems change the game as they are based on inductive transmission of energy. There is a coil inside the pavement where an electromagnetic field is created that reaches a pad or plate placed on the underside of the vehicle. There is a reciprocal coil in the vehicle plate, in which electrical current is induced, thanks to the electromagnetic field emanating from the coil road plate, thus charging the battery.

“In the South Korean city of Gumi, two electric buses were tested as far back as 2013. This important development was carried out by the Korean Advanced Institute of Science and Technology (KAIST) using OLEV (Online Electric Vehicle) technology. Cables housed inside the pavement provide electrical power to vehicles traveling on its surface. The buses were able to travel 24 kilometres, while maintaining the electromagnetic levels within safety limits, which are one of the main pitfalls in the use of this technology. The OLEV system only supplies energy when the presence of a bus is detected, thus minimising the risk to pedestrians and other vehicles.”

“The buses were able to travel 24 kilometres while maintaining the electromagnetic levels within safety limits; one of the main pitfalls in the use of OLEV technology” 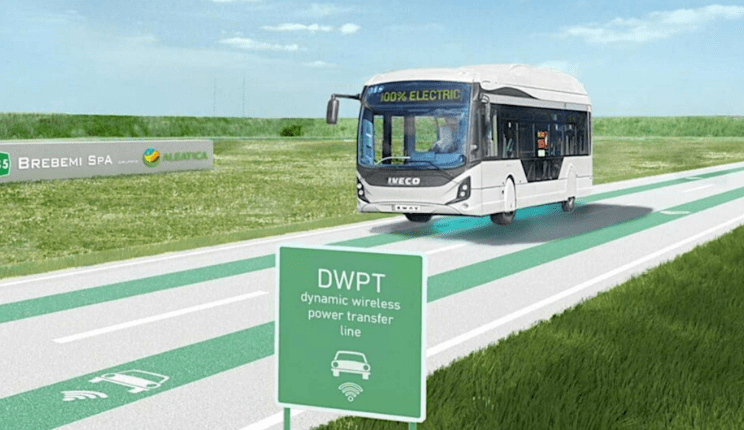 Zero-emission mobility of people and goods towards carbon neutrality

For Aleatica’s Head of R&D Ricardo Lobo Martinez, wirelessly charging electric vehicles by way of in-pavement induction loops, has become something of a way of life since his company’s involvement in a significant project in Italy (on one of Aleatica’s toll roads) was made public in May.

The ‘Arena del Futuro’ or the ‘Arena of the Future’ is the world’s first collaborative innovation project for “zero-emission mobility of people and goods towards carbon neutrality.”

This project demonstrates the effectiveness and efficiency of technologies related to powering electric cars, buses and commercial vehicles (notably Mercedes Actros trucks) by contactless dynamic inductive charging. The project includes the construction of a 1,050-metre asphalt ring fed with 1MW of electrical power of 1MW, called the "Arena of the Future".

It is located in a private area of the A35 motorway; the application of "Dynamic Wireless Power Transfer" technology to different ranges and models of electric vehicles in a static and dynamic environment. Advanced connectivity through 5G and IoT (Internet of Things) technologies to ensure maximum road safety and optimize the productivity of commercial vehicles. The optimization of the road itself makes it more durable and not negatively affects the inductive charge efficiency.

In the UK the city of Milton Keynes has been running a fleet of wirelessly charged electric buses since 2014. The buses receive a quick charge every time they stop. The Arena of the Future is taking the concept several steps further with the use of inductive loops meaning that the EVs don’t need to stop.

“We are developing a new system for electrification and for in-motion charging for electric vehicles,” Lobo explains. “We have been proven here in Spain in tests between Guadalajara and Madrid with new Mercedes Benz Actros trucks. The EVs don’t need to stop so this means we can move towards level 3 automation. The vehicle sensor data is stored in the cloud so we can quickly integrate the data into our management system for communication with our control centres.

The effectiveness of non-stop EV charging has far-reaching ramifications, as Lobo describes, not least in giving potential investors in the technology some surety that their investments are going yield solid rewards in the future.

“The effectiveness of non-stop EV charging has far-reaching ramifications, not least in giving potential investors in the technology some surety that their investments are going yield solid rewards in the future”

“In terms of the legal framework it's important that we develop intelligent management plans and strategies to improve these new technologies working in parallel with the car manufacturers, as until now the different car manufacturers have been working in silos,” he points out. “In the long term this means that investors know that advances are being made across the board in technologies like this because we don't have just Mercedes Benz trucks on our roads.”

“We have to offer cities solutions in order to help them meet their European mobility targets,” Lobo adds enthusiastically. “We have to adapt our infrastructure to reflect this change. At the end of the day our clients are drivers so the goals are long term. Mobility is becoming an ever-more complex and challenging environment for cities.”

“However, these intelligent systems will not be implemented on today's roads, but on a new road generation, and it is in this field that a lack of planning has been identified. The role that a good road system plays in the socio-economic efficiency and sustainability of transport must urgently be recognised. In the middle of the last century, and especially in the late- 1970s, such considerations frequently disappeared from academic debate and have so far not achieved the relevance they deserve.”

“These intelligent systems will not be implemented on today's roads, but on a new road generation, and it is in this field that a lack of planning has been identified.”

The accelerated changes taking place in intelligent transport systems, and especially in the fields of autonomous, electric and cooperative driving, offer new opportunities to rethink the role and concept of road infrastructure and its possible contribution to transport efficiency and sustainability.

Bartolomé insists. “Potential improvements from new road concepts far exceed the incremental improvements that can be found in the niches of combustion engines, fuels or vehicle design.

“These new infrastructures will have to meet a set of requirements: to be able to withstand concentrated loads typical of autonomous systems; to maintain surface characteristics in the long term; and to equip the road with redundant steering and safety systems. This means the placement of multiple embedded sensors, which at the same time must be practicable for maintenance or replacement.

On the other hand, the electrification of the fleet requires an adequate balance between autonomy and charging possibilities. Ongoing charging, be it continuous or discontinuous, is the ideal solution from both an economic and environmental point of view. This scheme is compatible with complementary systems of combustion engines that charge batteries for those areas that lack the service and, of course, it is compatible with vehicles that have traditional propulsion systems.”