Tom Stone, editor of Intertraffic World and TTi, give his personal impressions of the week at the RAI.

As the gleaming, new M52 metro line whisked me from my hotel almost to the main entrance of the RAI, it felt almost like I was visiting a different city from the one that hosted the last Intertraffic Amsterdam back in 2018. But then, as I walked up to the exhibition hall, the familiar exterior and surroundings greet me like an old friend. “Now,” I thought, “I know exactly where I am.” Although it turned out I didn’t. 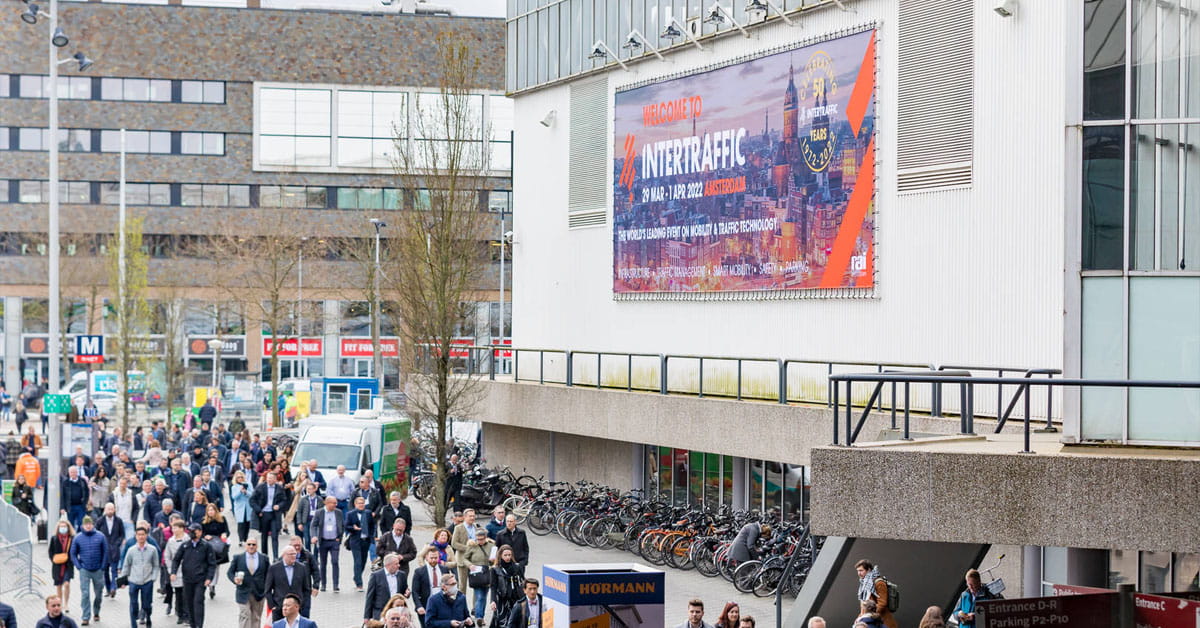 I strolled confidently past Entrance C knowing that I needed to get to the back of the complex, to Hall 7, for the opening ceremony. On seeing signs to Hall 8 I pressed on thinking I remembered the two halls being right next to each other… only to find myself outside an exhibition hall yet to open and an extremely long corridor leading to Hall 7. It became clear that although remembered parts of the RAI well, I’d completely forgotten how big it is. Intertraffic fills almost all of it.

The opening ceremony was my first opportunity to get a proper look at the newly redesigned Intertraffic theatres, now situated in their new home in Hall 7. Gone were the traditional parallel rows of seats and stage with lectern. Instead, each of the three auditoriums were set up with the audience arranged in a ‘horseshoe’ shape, and a stage on one side with a ‘runway’ strip running down the centre. Meanwhile, giant “#Intertraffic” lettering, picked out in retro bulbs, created and impressive effect on each stage.

The runway was used to great dramatic impact in the opening ceremony when dancers with pulsing flashing lights spelt out messages for the invited audience. And later in the week the runways were used by speakers in the packed knowledge-programme sessions to create a more inclusive, friendly atmosphere. After two years of Zoom and Teams it was a great to feel that, at last, we really were surrounded by and interacting with real people, talking to us and even looking us in the eye.

The opening ceremony also included the announcement of the Intertraffic Awards winners. Four years in the making it was another part of proceedings that had been redesigned. The new format with three winners – in the categories of Green Globe, User Experience and Inspiration – created a new focus for event attendees to find the most innovative new products and services, and created talking points throughout the week. 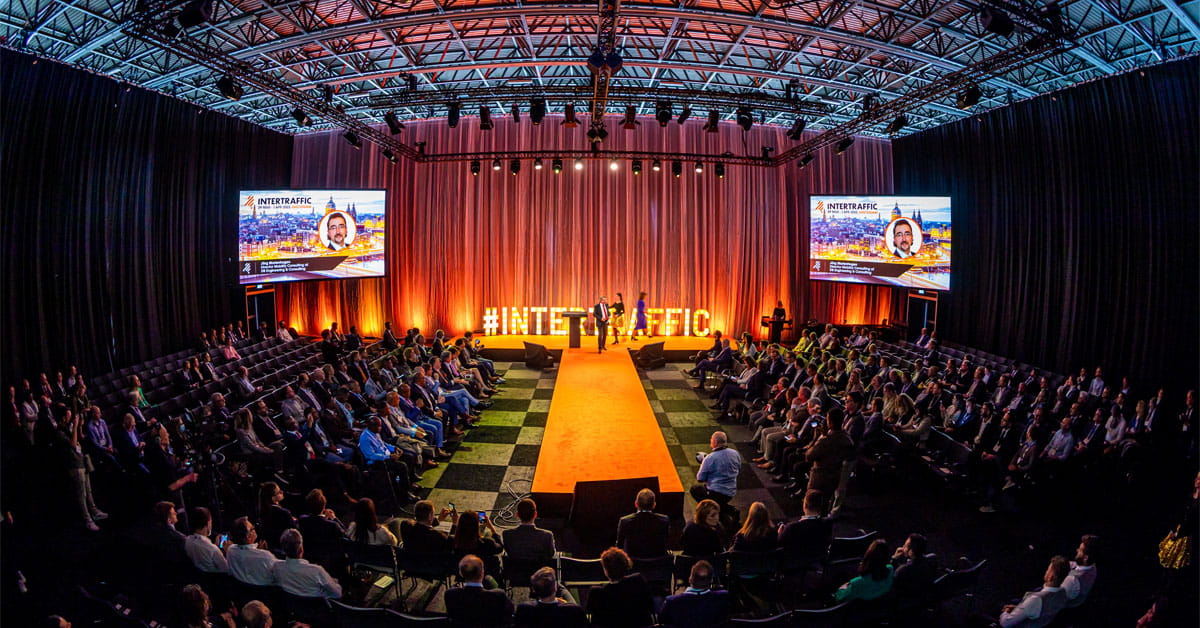 Out in the exhibition halls there were yet more changes. While Intertraffic still caters for the five categories of Infrastructure, Traffic Management, Safety, Parking and Smart Mobility, the dividing lines in the halls themselves are less obvious, reflecting the way in which different aspects of the surface transportation industry are themselves overlapping and merging.

As I walked around the RAI on the first two days, the other thing that surprised me was the number of visitors. Of course, I knew that Intertraffic was always a busy show, but I’d forgotten exactly what it felt like to be surrounded by so many people at an industry event. The lifting of face mask restrictions in the Netherlands just a couple of weeks before the show began meant that also making a return was the buzz of conversation, which filled the halls as old friends were greeted, new connections made and deals struck… all uninhibited by nose and mouth coverings.

Once underway, the week flew by. I was extremely busy both distributing Intertraffic World magazine – the annual publication I edit, which brings Intertraffic to life even for transport professionals who cannot attend a physical event – and also making a podcast and conducting video interviews for Traffic Technology International, the other title I oversee. For any journalist in this sector Intertraffic Amsterdam has enough content to fill a year’s worth of magazine pages, which makes the challenge not in finding stories, but in finding the very best. It’s a tiring, but hugely enjoyable task.

Leaving Amsterdam with a voice recorder full of great stories, I happily recalled the fantastic ways in which both the event itself and the city have evolved in the past four years – new transport options across the capital are bringing people closer together, just as Intertraffic is facilitating connections in new and exciting ways. But perhaps what made me even happier was that both the city and the RAI are full of people again, doing things together again, and in that sense, it’s good to know sometimes the old ways are still the best – and nothing will ever replace the human connection generated by a handshake and a smile. 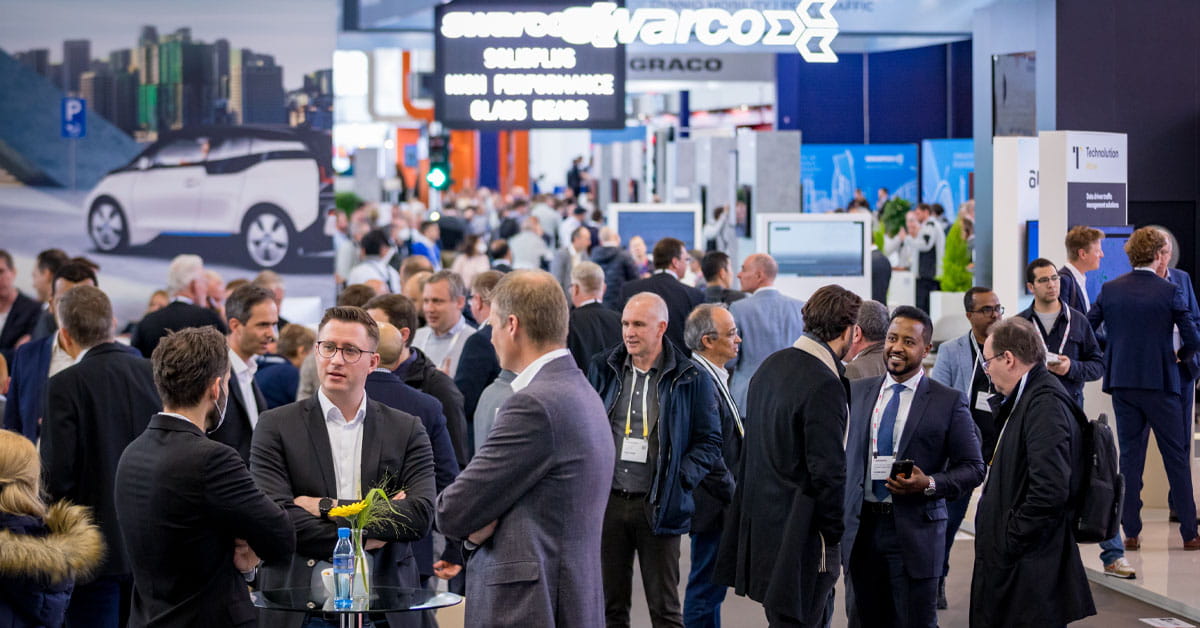